Backyard Beauty and Beyond 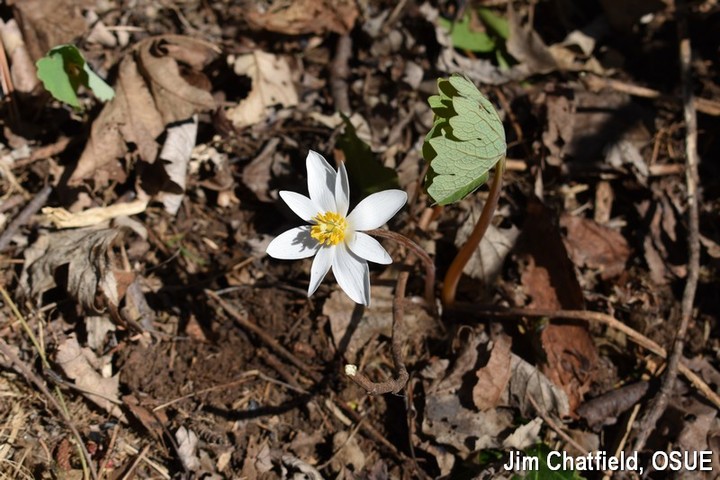 One bargain of our current dilemma is that it allows for more attentive horticultural and botanical navel-gazing. So here is some of what is happening in my literal backyard, with a few additional observations from appropriately-distanced health walks.

May-apples (Podophyllum peltatum). Our may-apple plants were dug up over three decades ago from a former rental home and woods near Delaware, Ohio.  We now have a 100-foot square rhizomatous patch.  You can see what they looked like on April 3, and then their development by April 5. Note that single-leafed may-apples do not provide the leaf axil needed for the development of a peduncle (flower stalk) and subsequent flowers on the two-leaved shoots. Berberidaceae, barberry family.

Virginia bluebells (Mertensia virginica).  This is another transplant, in this case from my wife’s Geneseo, Illinois farmer grandparents, by way of her Hilliard, Ohio parents, and now our Doylestown, Ohio area backyard.  Lush foliage, and something I never noticed, how lovely the beginning flower buds appear before expanding into their long-necked belles. Boraginaceae, borage family.

Bloodroot (Sanguinaria canadensis). Yet another transplant from those Delaware County woods. The lovely single clasping leaves with the teardrop flowers (April 5) fully emerged in our backyard by the next morning. In an homage to entomophiliac Joe Boggs, let’s point out that bloodroot is one of the plants that has seeds dispersed by ants (myrmecochory). Debris in the ant nests provide organic residue ripe for bloodroot seed germination. Rhizomes allow for the perennial nature of bloodroot plants and produce a reddish-orange “blood” formerly used for dyes, but toxic sanguinarine therein is a hazard. Papaveraceae, the poppy family.

Ostrich fern (Matteuccia struthiopteris). This is such a great garden plant (a winner of the Royal Horticultural Society of Garden Merit).  Coming soon, the green sterile fronds will unfurl, one of the great treats of spring. In autumn, the fertile fronds, shorter and brown when ripe will develop and release spores early the next Spring, probably right now. Cooked, unfurling “fiddlehead” fronds are a culinary treat. Ferns are vascular plants that reproduce by spores instead of seeds. The family for ostrich fern is the Onocleaceae.

Striped maple (Acer pensylvanica).  This is our native striped maple, with its green-and-white-striped bark and broad palmate maple leaves. It is in a shaded, protected location in our backyard, helpful since this species does not do well in full sun. When the Wooster Tornado of 2010 roared in to Secrest Arboretum the healthy striped maples were suddenly exposed to much sunnier conditions and within a few years, cankered and then died.  Foliage is just emerging in our backyard; note the differences that just two days make.

Three-flowered maple (Acer triflorum). This is one of my favorite maples, introduced to me years ago by then Secrest curator Ken Cochran (Ken is doing well in Florida).  The bud scales, the buds, the flowers, the soft spring and summer foliage, and the spectacular fall color are all fine ornamental features. Right now the attractive bud scales and emerging flowers are coming along; we shall follow development of this small to intermediate-sized maple through the season. Maples are in the Sapindaceae, the soapberry family.

And now for a few additional plants from recent distanced walks at local northeast Ohio parks and streets.

Large-flowered trillium (Trillium grandiflorum).  This wildflower is near the boardwalk at Johnson Woods Nature Preserve near Orrville, and ebbs and flows somewhat depending upon deer populations. We first saw a few leaves a week ago, but flower buds are ready to pop today as you can see from this image from yesterday, April 5. Also note a flower of what is to come from a picture at Johnson Woods on April 24, 2016. Family: Melanthiaceae.  I always thought it was in the Liliaceae, but the Angiosperm Phylogeny Group reclassified it in 1998. About time I caught up.

Tuliptree (Liriodendron tulipifera). What a lovely specimen of the magnolia family (Magnoliaceae), with its lovely straight trunks and striated bark on younger trees, seen at Seiberling Naturealm in Akron last week. Tuliptree is the tallest eastern U.S. hardwood tree. It is also called yellowpoplar and tulippoplar. The “tulip” part is easy to understand, with the yellow and orange flowers and the leaves that look like tulips, but I have asked a number of people over the years, why the “poplar” name, since it is obviously not in the genus Populus or the Salicaceae, the willow family, of which it is a member.

I have asked foresters if the wood is similar to poplars, but they always look puzzled. Finally, after all these years I have an explanation that makes sense to me (perhaps I have been told ten times and now have finally learned). It is the leaves, fluttering in the wind, like Populus does (think of the perpendicular leaf petioles and leaf blades of quaking aspen, Populus tremuloides.

Two-leaved toothwort (Cardamine diphylla). Yesterday, at Wooster Memorial Park (five miles west of Wooster), with its 223 acres of hiking trails, and near the Rathborn Run meandering stream, we noted an herbaceous wildflower.  I thought it might be it our native pachysandra (Pachysandra procumbens), but it turned out to be two-leaved toothwort, as pointed out by Randy Rowe, a plant pathologist from OSU and long-time devotee of Wooster Memorial Park. This plant is a member of the Brassicaceae, the mustard family.

Dutchman’s breeches (Dicentra cucullaria) was blooming at Wooster Memorial Park yesterday.  It has dissected leaves and flowers like “pantaloons hanging from a clothesline”. Squirrelcorn (Dicentra canadensis) is another species that tends to flower a little later, and also differs in that its flower spurs are more heart-like and rounder, and squirrelcorn does not have the yellow waistband like Dutchman’s breeches.  Another wildflower in the Papaveraceae.

And then there was sumac, stark against the sky at the County Line Trail near Rittman, a flowering apricot tree in Wadsworth, coltsfoot blooming all over, spicebush at Johnson Woods Nature Preserve, and skunk-cabbage at Naturealm.  Ironically, in the Alanis Morissette sense, the skunkcabbage, not a true cabbage but rather in the Araceae, the Arum family, was growing side by side with garlic mustard, in the Brassicaceae, the family that includes true cabbage (Brassica oleracea). And, the first strawberry leaves are just to the east of our backyard at the Rittman Orchard.

It’s (one of the) most…wonderful times of the year!