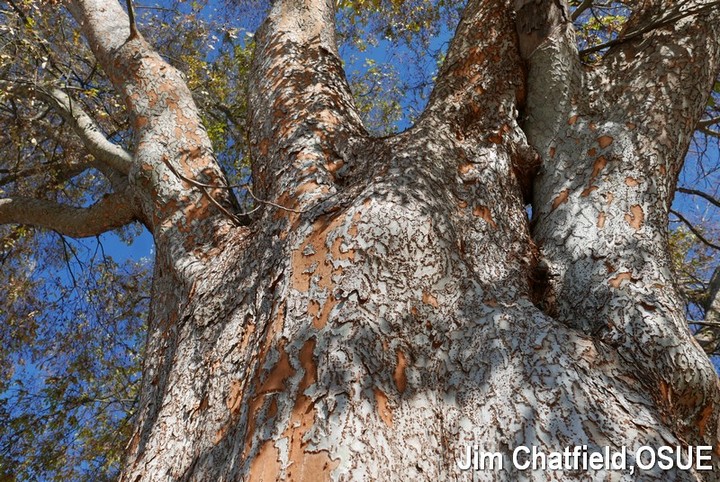 For some 15-20 years, Joe Boggs and Jim Chatfield wrote a monthly column in The Buckeye, the publication of the Ohio Nursery & Landscape Association. We counterpointed, hurled insults, had a lot of fun, and hopefully drew out some useful thoughts about various horticultural, entomological, plant pathological, and philosophical issues. The column ran its course, but now as we do not have an opportunity to do our periodic counterpunching in person, and proceed with our social distancing, we feel the urge to renew our vows.

These first Point Counter Point alerts will focus on the names of plant diseases and pests, with the timely addition of thoughts on the names of human diseases. We will discuss both the biologic science uses for understanding the origin of pathogens, pests, and plants, and the misnomers and the potential misuse of origin names that caused the World Health Organization (WHO) to plea for the avoidance of names that “result in unnecessary negative effects on nations, economies and people”.

For the latter think of the misnomer of Spanish flu and the negative connotation of the “Chinese virus” for SARS-COV-2, the pathogen that causes COVID-19.  When we come to the end of this series we shall make a call for what we think is wrongly criticized as “political correctness”. As our buddy Greg Ina of Davey Tree says, political correctness, properly applied, is really about our crucial need for civility to one another.  For now, for this Point Counter Point, let us consider something more specific to plant lovers – Dutch elm disease, caused by the fungal pathogen Ophiostoma ulmi and Ophiostoma novo-ulmi.

Joe: Figures you would start with a phytopathological example. As Spiro Agnew would say to you, Jim: “You pusillanimous pussyfoot of parasitism!”

Jim: Well, so much for civility, Joe. At any rate, Dutch elm disease, a misnomer of a name, if ever I saw one.

Joe: What do you mean, those darn Dutchmen, look what they did to our All-American elms!

Jim:  As you know, by now, that is of course, not the case. The fungal pathogen that causes the disease is in fact, thought to be from Asia. The pathogen made it to Europe in the early 20th century, and along with the European bark beetle, that was an efficient vector from elm to elm, infected European elms, causing a deadly vascular disease.

Joe: Those darn Asians, how could they do this! They must have known how bad this fungus was on lacerbark elm, Ulmus parvifolia in Asia!

Jim: Not, of course – and stop exclaiming! In a familiar story for plant diseases (and for invasive insect pests), the pathogen and the Asian elms (such as Ulmus parvifolia) presumably co-evolved. Over long periods of time Ceratocystis ulmi (now known as Ophiostoma ulmi and a more virulent strain, Ophiostoma novo-ulmi), resulting in succeeding generations of those surviving Asian elms with lower susceptibility.

This is a common natural selection story, killing off all your hosts is not a good long-term evolutionary success story for a pathogen. Surviving elms in Asia had a little something going for them, allelochemicals and other factors allowing the Asian elms to be resistant.  In fact, this lower susceptibility of Asian elms is a key piece of evidence that the pathogen is from Asia.

Joe: So where do the Dutchmen come into the picture?

Joe:  So, the Dutch got tagged with the name just because they were smart enough to identify the pathogen?

Jim: Exactly. But as it is today it is often difficult to avoid international trade and prevent shipping of infected material, and elm logs from Europe arrived in the United States, destined for the Ohio veneer market. One of the methods of moving those logs in the U.S. was via the railroads. 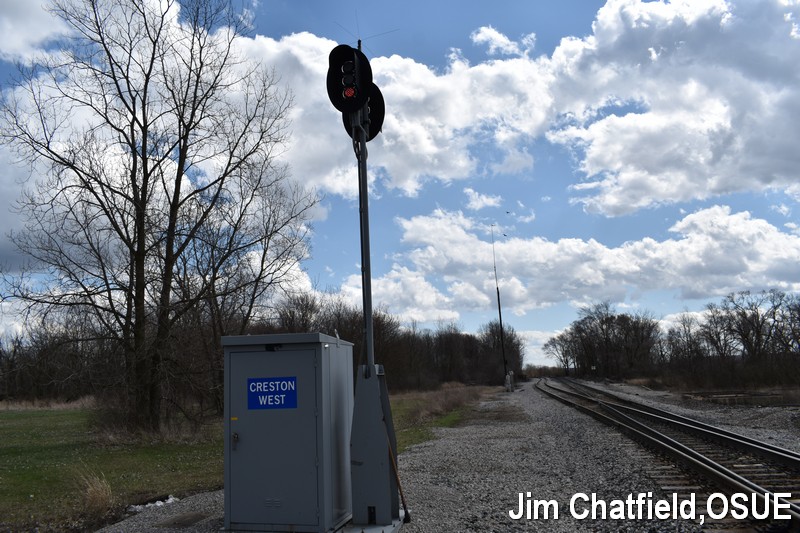 Jim: Actually, they played a key role in the discovery of the first confirmed case of “Dutch” elm disease in the U.S. Does the name Creston, Ohio mean anything to you?

Joe: Certainly, my cousin Susan is from there. It is in Wayne County up near you.

Jim: Yes, she is my banker in Orrville.

Joe: I always wanted to be a banker…

Jim: Ah, channeling your inner Kramer…Anyway, the tales she tells of Cousin Joe, why…

Joe: Quickly, back to the elms. 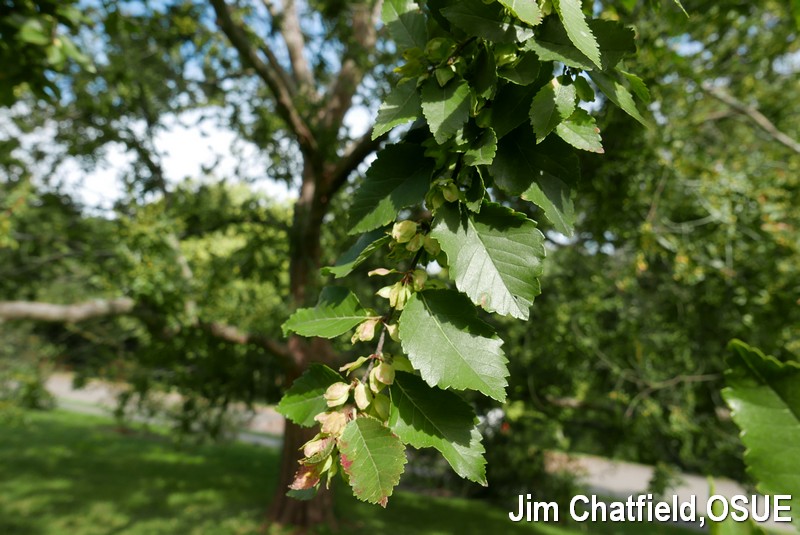 Jim: Well, Creston is about nine miles from my house, and in fact my wife Laura and I did our socially distanced exercise (from others) there yesterday, walking on the County Line Rails to Trails route.  Almost a century ago, in 1929, a worker at the railyard there called the Ohio Agricultural Experiment Station (OAES) in Wooster, now called the Ohio Agricultural Research and Development Center, soon to be the OSU Wooster Campus.

Joe: I am drifting…

Jim: And said all the trees along the track were dying.

Jim: No, but the American elm (Ulmus americana) and other native elms were dying. Paul Tilford from OAES took samples, cultured the fungus, sent them to Beltsville Maryland and the USDA, where they identified Ceratocystis ulmi, and the rest is history: the first confirmation of Dutch elm disease in the United States!

Joe: So, there are no American elms left?

Jim: No, it did not wipe them all out, and we have cultivars of American elm and hybrids of American elm with Chinese elm that now are used extensively in urban forestry, but the loss of the pride and joy of many tree-lined cities throughout the country was a tragic case of an invasive plant pathogen. Some would say that Dutch elm disease was the cause of the rise of professional urban forestry in the United States.  A “Don’t know what you’ve got ‘til it’s gone” sort of thing.

Joe; What do taxis have to do with it?  Anyway, any elms left in Creston?

Jim: Funny you should ask. We did find a few on our walk yesterday. The fungus and the disease are still in Ohio, as you know, but there were some elm tree volunteeers along the railway in Creston, though we did not see any old enough to have existed there in 1929.  It was cool to see them along the tracks.

This story of natural selection history and plant resistance to pathogens and pests is important, and does mean that the balance WHO is drawing relative to cultural sensitivities in names with the scientific importance of keeping origins in mind is an important fine line. Consider insects, such as the emerald ash borer (Agrilus planipennis) and the bronze birch borer (Agrilus anxius). Let me….

Joe: No: Let me.  Well, maybe in our next Point Counter Point. You have already gone on too long with your plant disease example. But I do want to have one last word.

You mentioned above about the misnomer of Spanish flu, relative to that pandemic a century ago, another example of a country immortalized in a negative way for doing something right. Spain, a non-combatant in World War I, openly sounded the warnings about the pandemic flu because countries involved in the Great War to End All Wars (another misnomer of a name) did not want to further reduce the morale of soldiers in the trenches.

The first recorded case of the Spanish flu was from Fort Riley, Kansas in 1918, and current theories as to the origins of the pathogen range from France, to China, to Great Britain, to the United States and North America. Estimates of death from the “Spanish” flu worldwide range from 17 million to 100 million.  The pathogen involved in this flu disease was an H1N1 virus.

Joe: In German Village in Columbus?

Jim: Named for Friedrich Schiller. Historian and poet, natural philosopher and physician, the man who wrote the words for the “Ode to Joy” accompaniment to Beethoven’s Ninth Symphony.

Joe: Interesting. But as promised, for the true final words, which will lead off our next Point Counter Point bygl-alert on “Whats in a Name”, lets do some Latin binomials: Agrilus planipennis and Agrilus anxius.