Daffodils or Jonquils...Are They One in the Same...Which Are They? 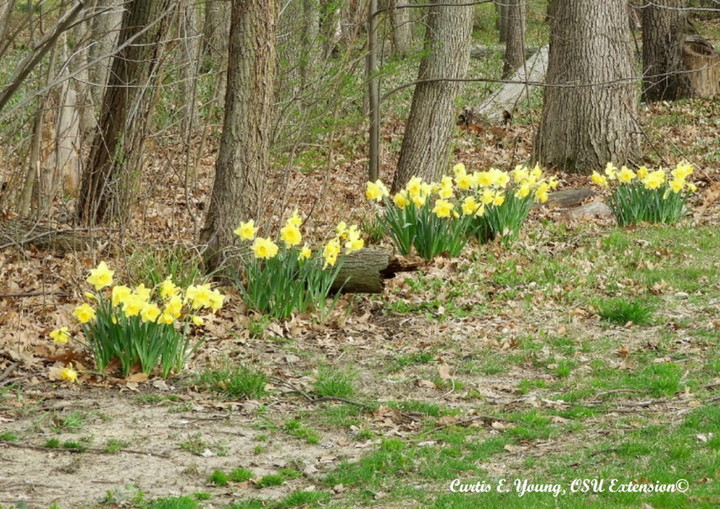 Popping up in many landscapes, along edges of roads, and in woodlots where old homesteads had once been throughout Ohio are the perennial daffodils.  Many of the daffodils are yellow in flower color, but there are multitudes of shades of yellow plus splashes of additional colors such as red, orange, pink, green and white.

These perennials have been popular for decades and possibly for centuries.  They are typically very easy to grow and require minimal attention most of the time.  However, there is some confusion in the public about whether to call them daffodils or jonquils.  The short answer to this question is that they are almost the same thing.  In other words, ALL jonquils are daffodils, but not all daffodils are jonquils.  As an entomologist, we have a similar adage, ALL bugs are insects, but not all insects are bugs!  What all that means follows.

Any member of the plant genus Narcissus (Latin scientific name) (Family Amaryllidaceae) could be called a daffodil (common non-scientific name).  Some use the genus name Narcissus as a common name narcissus to refer to the plants that can be found in the genus, possibly a questionable practice.  There are at least 40 and maybe as many as 200 different species in the genus and over 25,000 registered cultivars (named hybrids) classified into 13 Divisions per the Royal Horticultural Society classification system.  Most daffodils produce a single flower on each floral stock composed of six flat flower tepals (structures that are neither sepals nor petals) surrounding a central cup.

Members of Division 4 have double blossoms.

When the flower stocks first appear, the flower buds are enclosed in a covering called a spathe.  As the flower matures, the spathe splits open and releases the bloom.  The spathe dries and can be found at the base of the flower as a papery material.

Several common garden species included in this group of plants are the common and popular daffodil (a.k.a. wild daffodil or Lent lily) (N. pseudonarcissus), the jonquil (N. jonquilla), and the poet’s narcissus (N. poeticus).

Also amongst the daffodils are those called "paperwhites," a couple of species (e.g., N. papyraceus) that are not hardy in northern climates such as that of Ohio, but are considered naturalized in states such as Texas, California and Louisiana.  In Ohio and other northern states, they are grown as a house plant, and can be forced to flower throughout the year.  Paperwhites are called such because of the nearly pure white flowers that they produce in bunches at the tops of their floral stems.  Most daffodil species are native to southern Europe and northern Africa.

Daffodils are bulb forming perennial plants.  The bulbs are similar in appearance to onion bulbs.  This is unfortunate, because daffodil bulbs are toxic.  All parts of the plant are toxic, however the bulb is the most toxic part.  Daffodils contain an alkaloid compound (lycorine) that causes vomiting and gastrointestinal cramping.  This compound is toxic to humans as well as other animals.  Symptoms of poisoning include diarrhea, vomiting, salivation and, in extreme cases, convulsions and cardiac arrhythmias.

When buying daffodil bulbs from catalogs and other sources, there is a standard way of describing and listing the 25,000 plus cultivars of daffodils.  These descriptions are a combination of a number and letters.  The number is in reference to a "classification system" of 13 "divisions" and the letters are "color codes" of the perianth (tepals) and corona (cup) of the flower.   For example, the cultivar Hillstar has the classification coding 7 YYW-YWW [Jonquilla] which means it is in Division VII (Jonquilla and Apodanthus Daffodil Cultivars) with both sets of tepals yellow at their tips fading to white at their bases, and the corona being yellow at its base fading into a white rim of the cup.  The American Daffodil Society's webpage ([ https://thedaffodilsociety.com/a-guide-to-dafodils/classification-system/ ]) provides a full description of the divisions and color code system.

If one plans their plantings well, they can have daffodils in flower from late March through early May.