Say Hello to My Little Friends 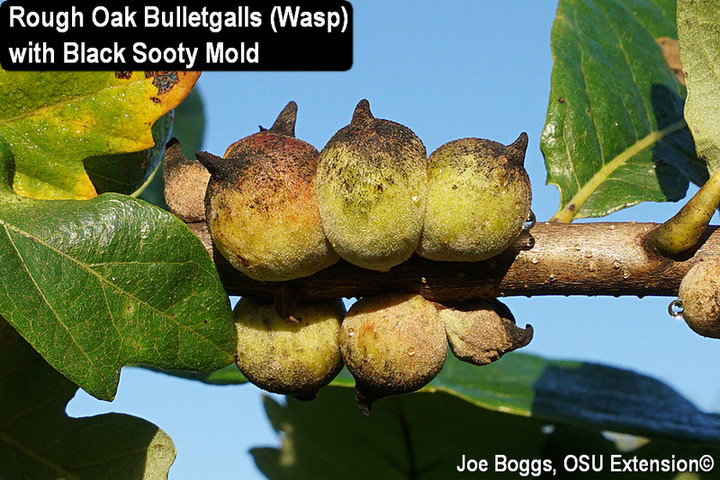 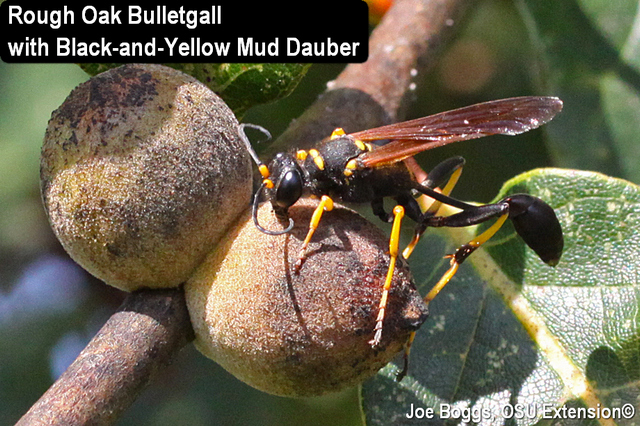 The life cycle of the oak rough bulletgall wasps involves two different types of galls produced at different times of the year.  The current bulletgalls will give rise to female wasps around the end of this month; no males are produced.  Wasp emergence is heralded by a small hole in the gall.  Once the wasps have emerged, the "spent" galls shrivel, darken in color.  Most will remain attached to continue providing gall-interest next season. 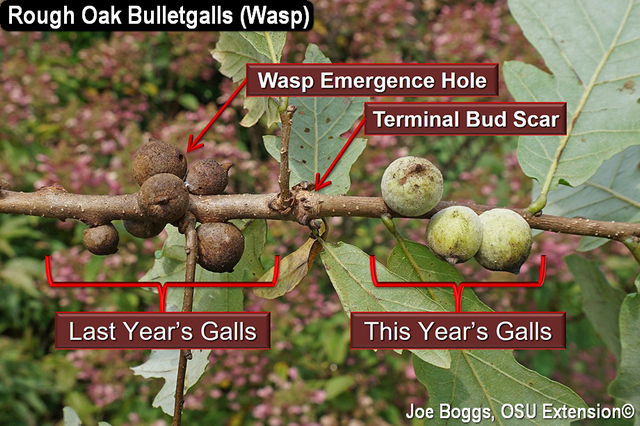 The self-fertile females that emerge from this season's galls crawl to a dormant leaf bud where they lay a single egg per bud.  These eggs along with the resulting wasp larvae stimulate the tree to produce small, inconspicuous leaf galls in the spring.  Both male and female wasps develop inside these leaf galls and adults emerge in mid-to-late spring.

The mated females fly or crawl to newly elongated twigs where they insert their eggs through the phloem to be in contact with the cambium.  The wasp requires the services of undifferentiated (meristematic) cells to grow their bulletgalls.  They may also have the capability to hijack meristematic bud tissue. 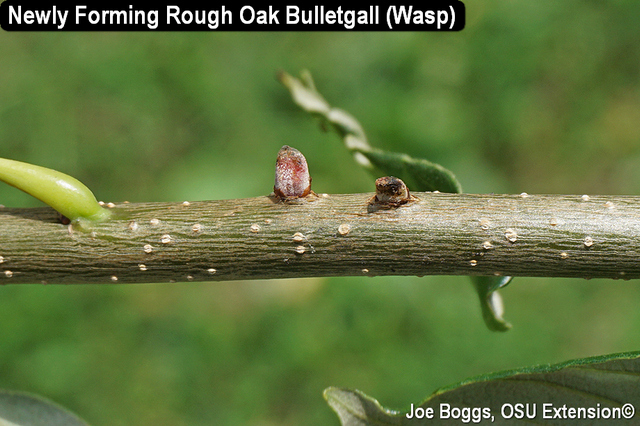 I most often find the so-called Round Oak Bulletgall Wasp (D. quercusglobulus), which doesn't have an approved common name, arising from meristematic bud tissue.  However, they may also commandeer meristematic cambial tissue.  Of course, this is based entirely on personal observations.  I don't know of any scientific studies that have clearly disclosed whether there is a preferred source of meristematic tissue for this gall wasp, or the rough bulletgall wasp, or if it's an either/or proposition for these wasps. 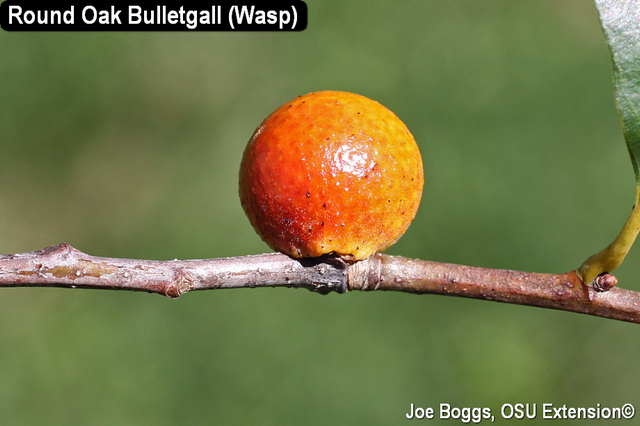 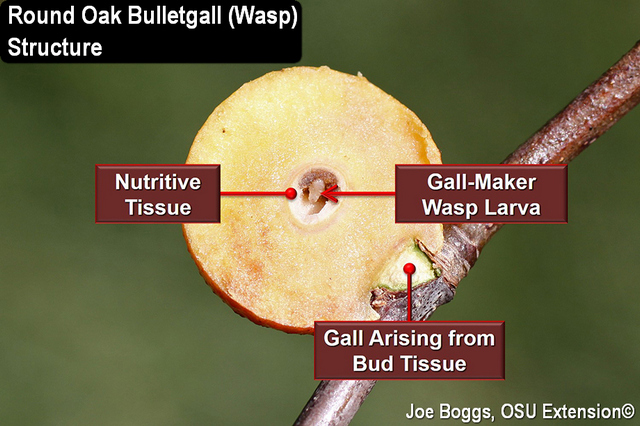 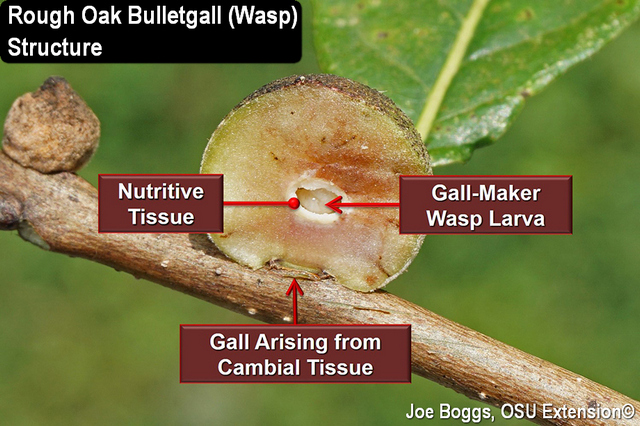 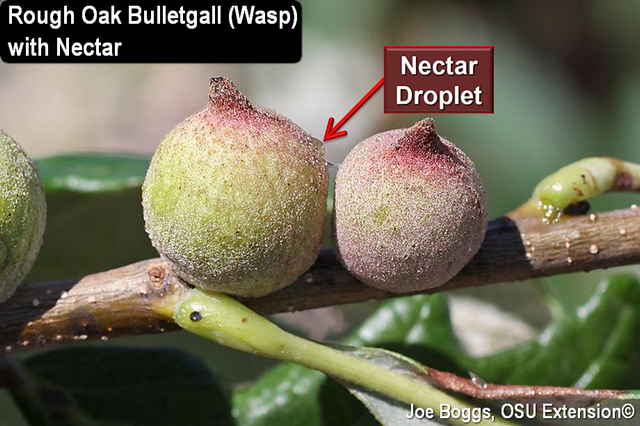 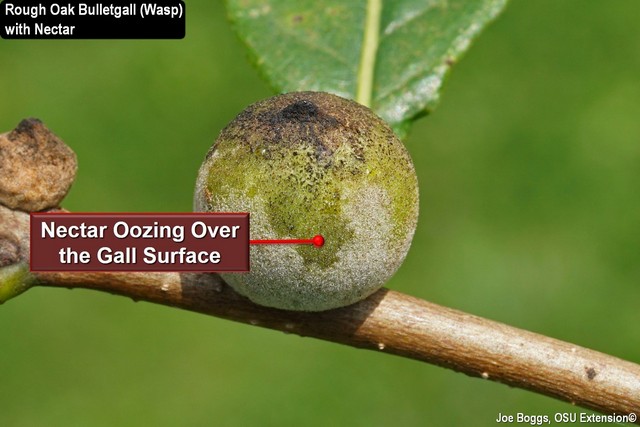 The first time I observed blackened bulletgalls, I thought the sooty molds had colonized sugary honeydew dripping onto the galls from the backend of a phloem-sucking insect such as aphids or soft scales.  Of course, there was not such infestation.  The sugar source was from the galls themselves. 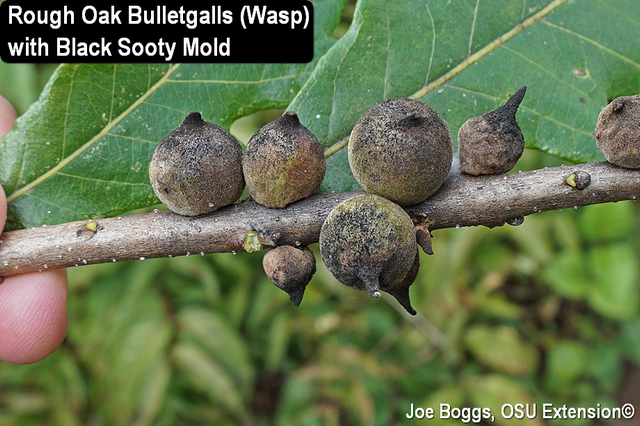 The nectar exuded from the extrafloral nectaries attract a variety of stinging insects including bald-faced hornets (Dolichovespula maculata) and yellowjackets (Vespula spp.) as well as biting insects such as carpenter ants (Camponotus spp.). 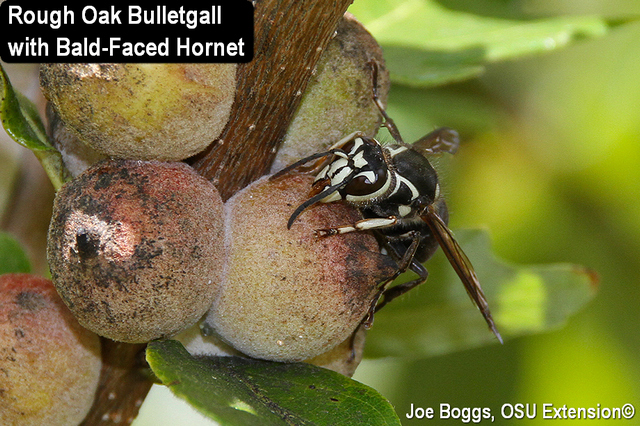 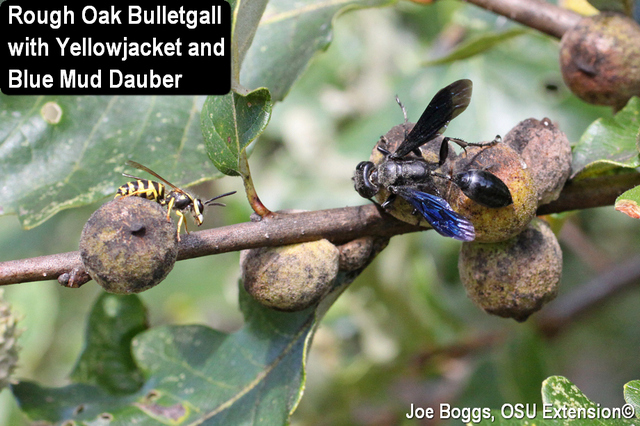 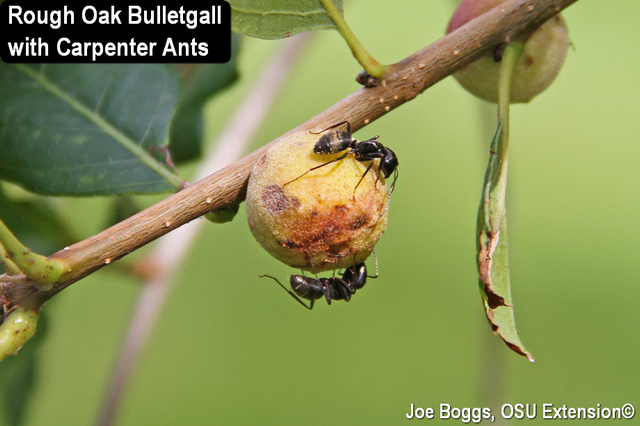 Yellowjackets and bald-faced hornets are Jekyll and Hyde wasps.  They are predaceous beneficial insects during most of the growing season chowing-down on soft-bodied insects such as caterpillars and sawfly larvae.  However, in the fall, they switch from high-protein diets to high carbohydrate diets.  They become a nuisance as they compete with our own high-carb consumption of soda, donuts, and certain adult beverages.

Presumably, the close attention of stinging and biting insects prevents the immature gall-making wasp larvae located within the galls from receiving the unwanted attention of predators and parasitoids.  In other words, a little sugar bribe pays for the protection of the gall-maker's helpless offspring as they feast on nutrient tissue pizza.