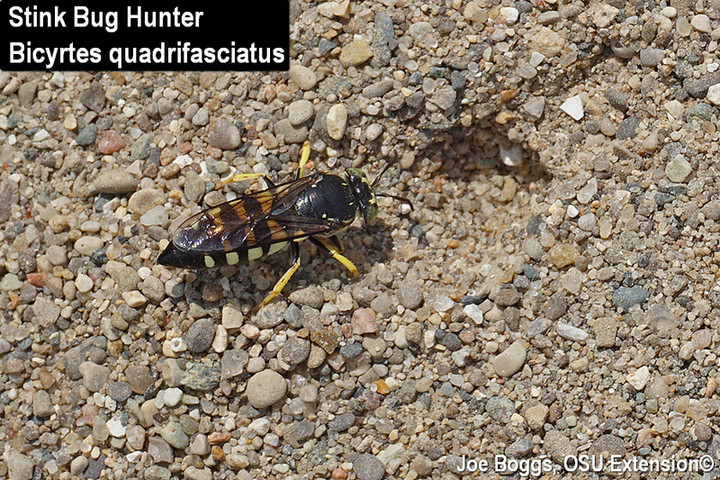 I attended a meeting last Thursday on plant pollinators at the Cincinnati Zoo and Botanical Garden (CZBG).  One focus was on managing pests by increasing the abundance and diversity of flowering plants in a landscape. 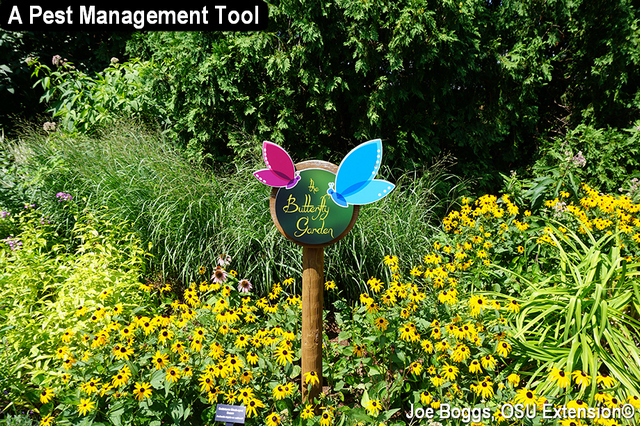 Many beneficial insects wear two hats by serving as both plant pollinators and enemies of other insects.  It's likely one reason the CZBG rarely needs to deal with significant plant pest problems is because the CZBG's widely diverse landscape encompasses a smorgasbord of flowering plants including trees and shrubs as well as annuals and herbaceous perennials.  They make no insecticide applications because they don't need to apply this pest management tool; they're using another one. 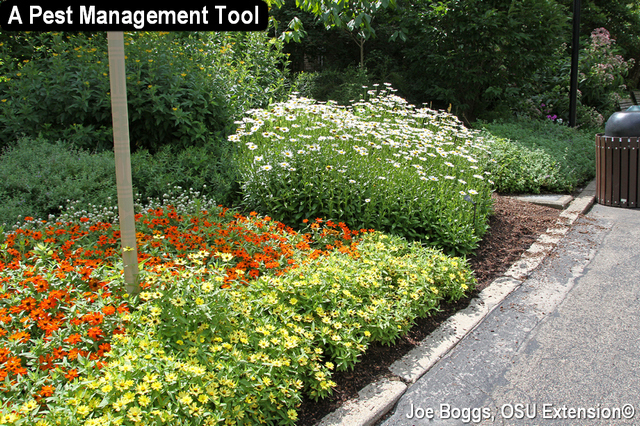 After the meeting, Steve Foltz (Horticulture Director) showed me an expanse of sand that was literally buzzing with a perfect example.  Small wasps were busily digging burrows.  They were female Bicyrtes quadrifasciatus, a species with no approved common name.  However, the wasps are generally referred to as the Stink Bug Hunter (SBH) based on their preferred prey. They are arch enemies of stink bugs including the non-native invasive Brown Marmorated Stink Bugs (BMSB) (Halyomorpha halys) 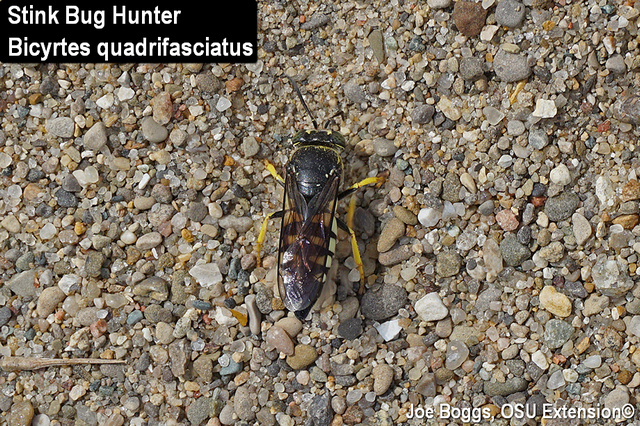 SBH belongs to the family Crabronidae which also includes the Eastern Cicada Killer (Sphecius speciosus).  However, they are only about 3/4ths the size of cicada killers.  Both wasps have conspicuous cream-colored abdominal markings on a black background.  The SBH females have four abdominal stripes which are referenced in their specific epithet, quadrifasciatus, means "four banded." 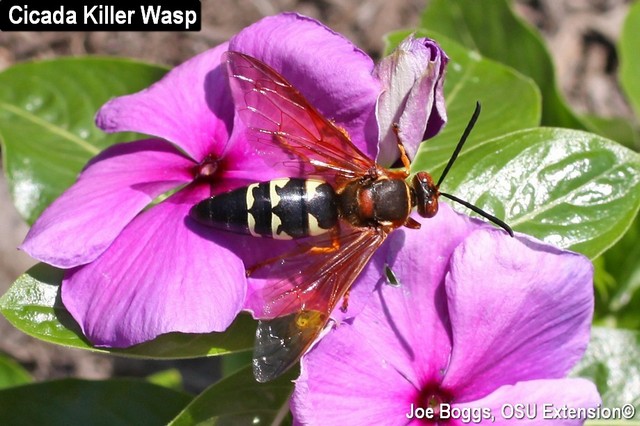 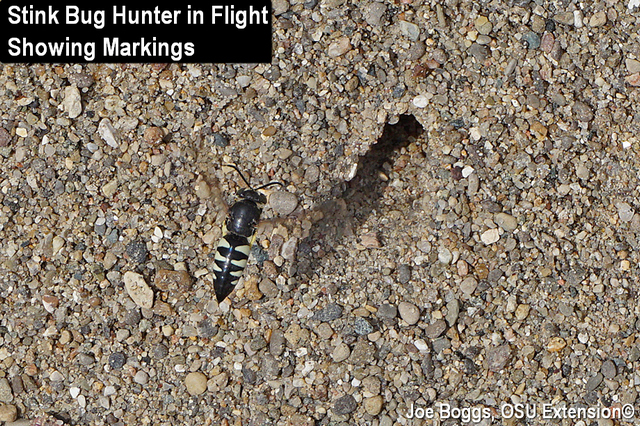 As with the cicada killers, SBH is considered a "solitary wasp" even though they typically nest in large numbers over relatively small areas with their collection of burrows often referred to as "colonies."  The colonies evolve because the females of both species have specific nesting requirements.  It is also speculated that large numbers of females gathered in one location helps males to find them which increases the chances all of the females will be mated. 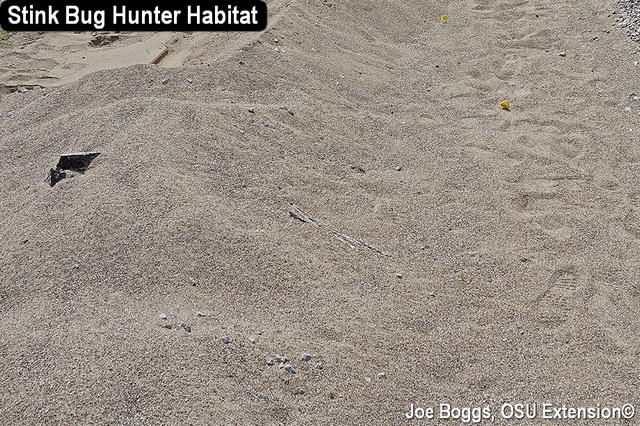 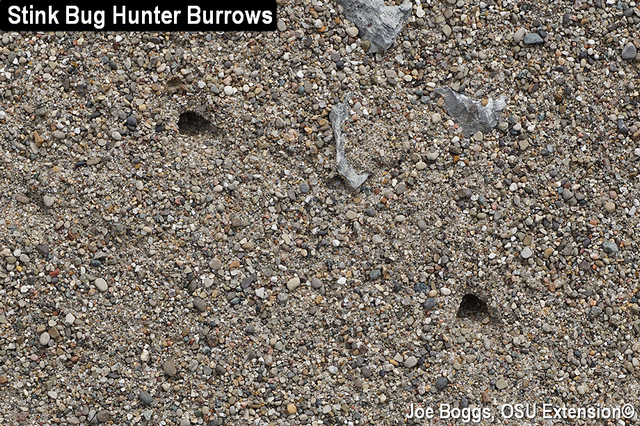 SBH digs their burrows almost exclusively in sand which is why they are grouped within the Sand Wasp tribe, Bembicini.  They are fast diggers and look like tiny dogs shoveling sand with their front legs backward between their hind legs.  A close examination will reveal that their first and second pairs of legs are slightly curved inward to support digging as well as grasping their prey. 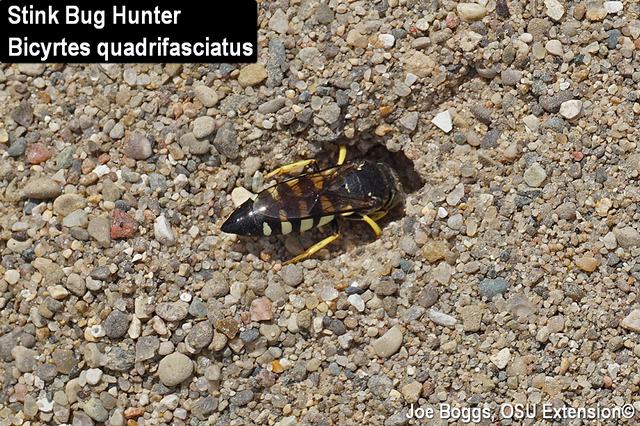 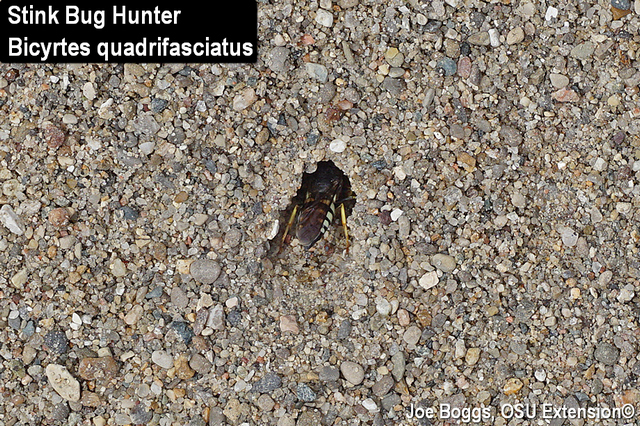 SBH females may attack different types of True Bugs (suborder Heteroptera) including leaf-footed bugs (family Coreidae).  However, it's their overarching predilection for stink bugs (family Pentatomidae) that makes them such an important enemy of BMSB. 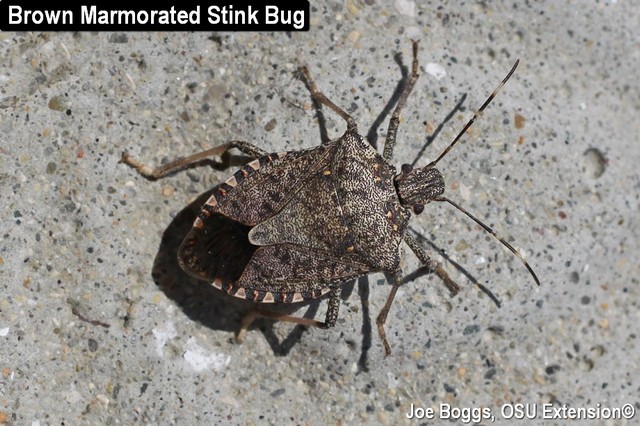 The females tend to select stink bug nymphs, possibly owing to their smaller size compared to the adults.  She grabs and stings the nymph to paralyze it, then she carries her prize back to her burrow and stuffs it inside.  After she has provisioned her burrow with several helpless nymphs, she lays a single egg, leaves the burrow and seals the entrance.  It's an ingenious way to get around the lack of refrigeration.  The immobilized nymphs remain alive (perhaps horribly aware?) to serve as fresh meat for the soon-to-hatch, grub-like wasp larva. 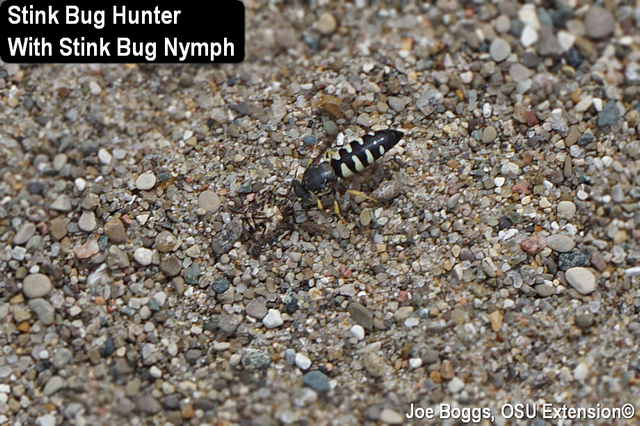 A survey of native biocontrol agents of BMSB conducted in 2011 by Penn State researchers in fruit orchards and surrounding habitat revealed that 96% of the stink bugs found in SBH burrows were BMSB nymphs.  While the survey was conducted during a "peak year" in BMSB numbers in PA and in locations with concentrated bug populations (orchards), the results still point to these sand wasps as being an important bio-ally.

What about the risk of getting stung?  Like cicada killers and the vast majority of solitary wasps, sand wasps were not aggressive.  In fact, as I strolled through the SBH colony at the CZBG to take pictures, the wasps never displayed any type of threatening behavior despite my close-in photo shoots.

Attracting these wasps to landscapes may be an important method for decreasing BMSB populations as well as a number of other stink bugs.  The adults feed on nectar; they are pollinators.  Adding "pollinator plants" to landscapes provides significant support for these and other bio-allies that can play a critical role in suppressing pests.  "Butterfly Gardens" and "Pollinator Gardens" should be appreciated beyond their support of pollinators; they're also pest management tools. 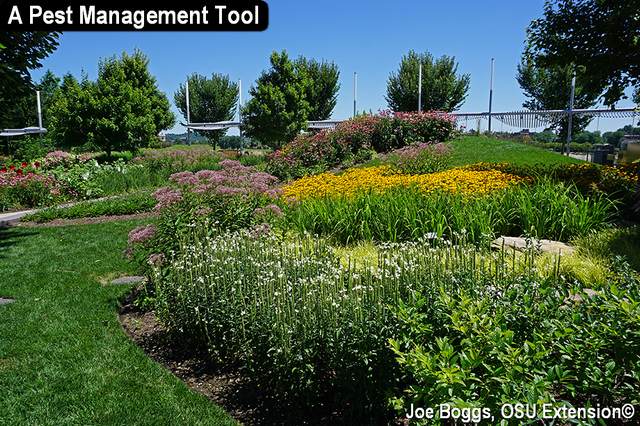