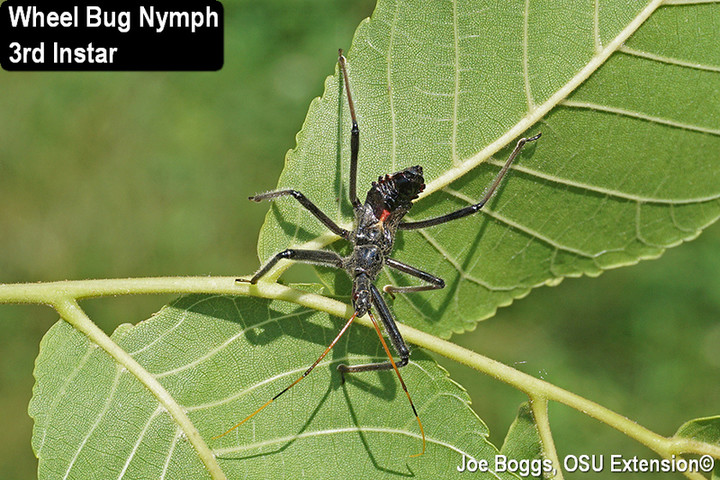 Insects belonging to the Hemipteran family Reduviidae are collectively known as “Assassin Bugs.”  The family includes over 190 species in North America and they are all are meat eaters.  The common name for the family clearly describes how these stealthy hunters make a living.

Family members sport potent predatory equipment including strong raptorial front legs for seizing and holding prey and powerful piercing-sucking mouthparts to suck the life out of their victims.  Assassins are highly effective stealthy hunters able to sneak up on some of the most powerful and well-armed insects.  I once watched an assassin bug grab and dispatch a bald-faced hornet which is no easy meal. 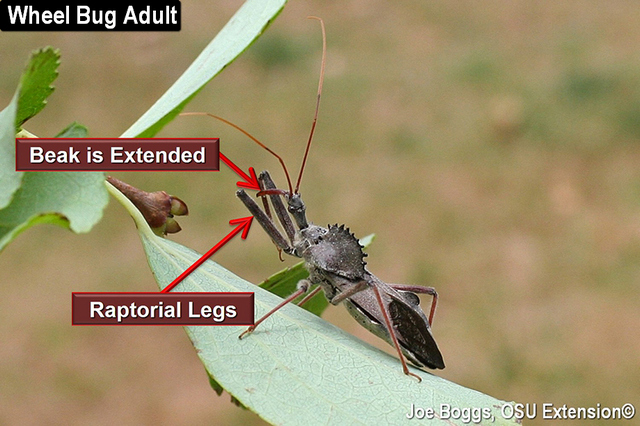 Some assassin bugs like those in the genus Zelus have additional assistance with their grabbing power in the form of a sticky goo covering their front legs.  The gluey material is produced by glands on their front legs making them function like sticky fly paper.  You may find the Pale Green Assassin Bug (Z. luridus) hanging out on flowers waiting to grab a quick meal with their sticky legs. 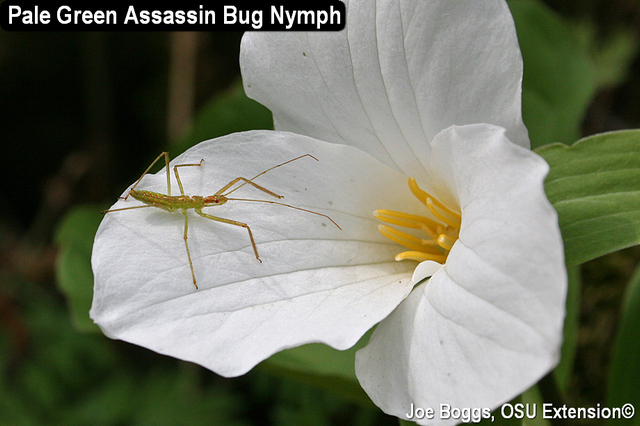 Once the assassins seize their prey, they use their piercing-sucking mouthparts, called a "beak," to inject paralyzing and pre-digestive enzymes.  In their final insecticidal act, the assassins suck out the essence-of-insect from their hapless victim. 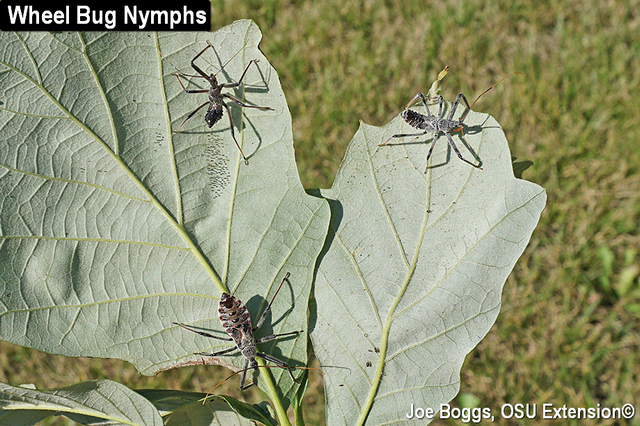 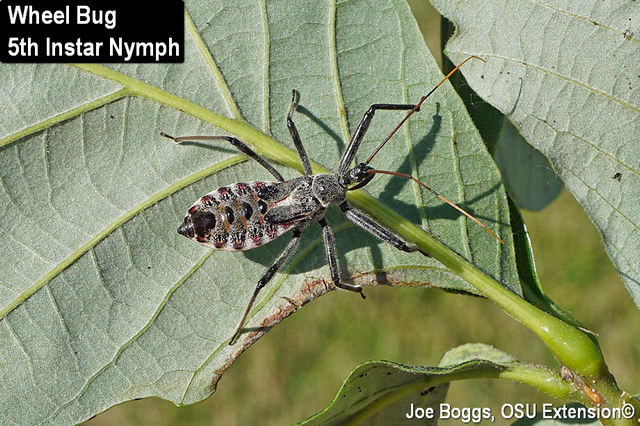 In fact, the nymphs of our native Wheel Bug (Arilus cristatus) are often mistaken for spiders.  The nymphs have long, spindly spider-like legs and they parade around with their abdomens held upright.  Of course, insects have six legs and spiders have eight legs.

Wheel bugs are one of the largest and most common assassin bugs found in Ohio.  Their name refers to a peculiar morphological feature that rises from the top of the adult bug's thorax.  The structure looks like half of a cogwheel, with the gear teeth clearly visible.  Wheel bugs are big, measuring almost 1 1/2" long, and their color varies from light gray to bluish-gray to grayish-brown. 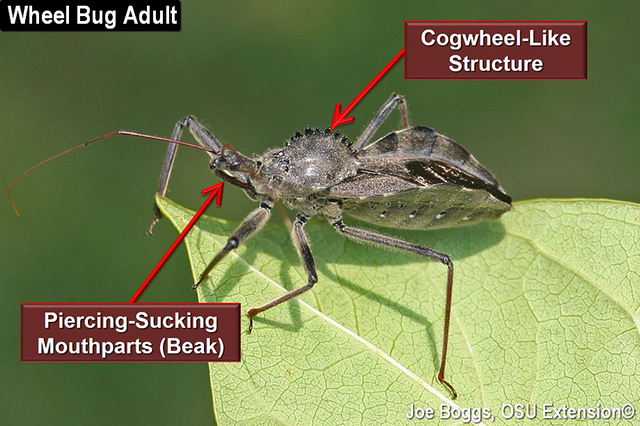 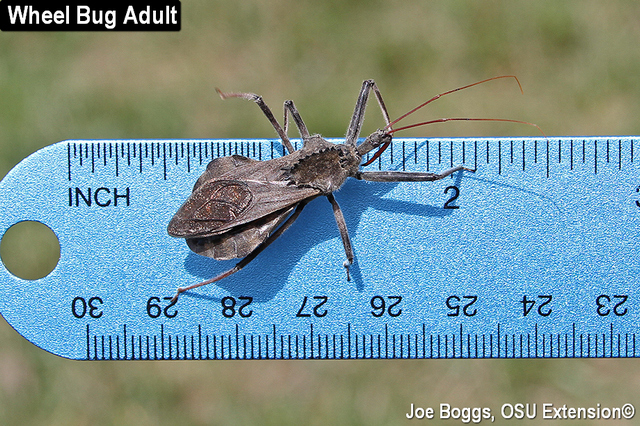 Caterpillars and sawfly larvae are favored table fare of these voracious predators; however, they will not turn their beaks up at other arthropod meat morsels.  Indeed, they will even nail the probing fingers of uninformed gardeners! 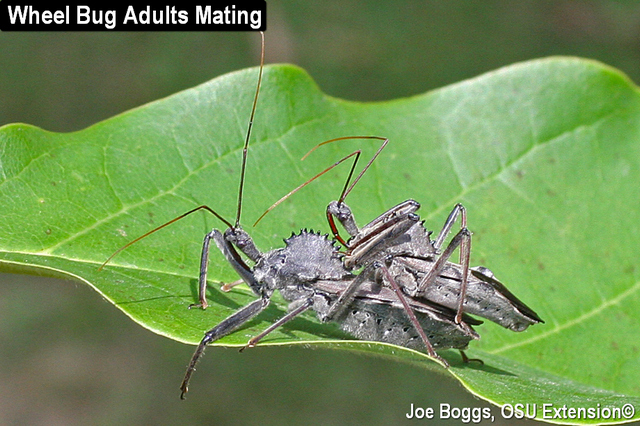 The name "kissing bug" may sound non-threatening until you learn why they were given that name.  Several species of bugs belonging to the genus Triatoma are collectively known as "kissing bugs" because they tend to bite near a person's mouth.  These "triatomine bugs" get away with their cheeky behavior by biting people while they sleep. 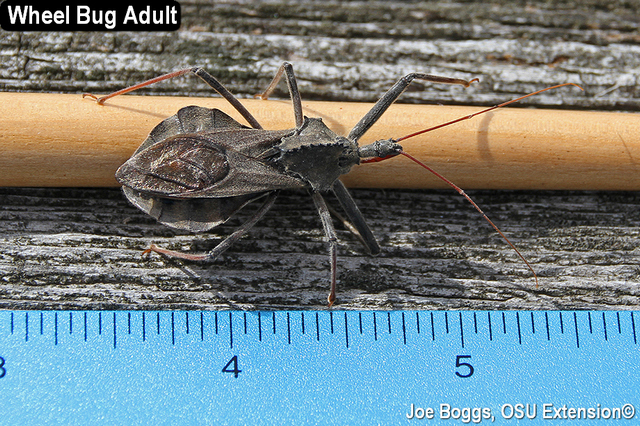 The second round of bug-induced panic occurred back in April.  This time, it was based on the reality that there is a kissing bug called the Bloodsucking Conenose (Triatoma sanguisuga) that may be found in the northern U.S. including Ohio.  Although it has a scary sounding common name, the conenose is very rare in Ohio and it doesn't acquire and spread the protozoan responsible for Chagas disease.  You can read about this second panic in a BYGL Alert that I posted on April 25 titled, "Kissing Bug Hysteria Rises Again," by clicking on this hotlink:  https://bygl.osu.edu/index.php/node/1243 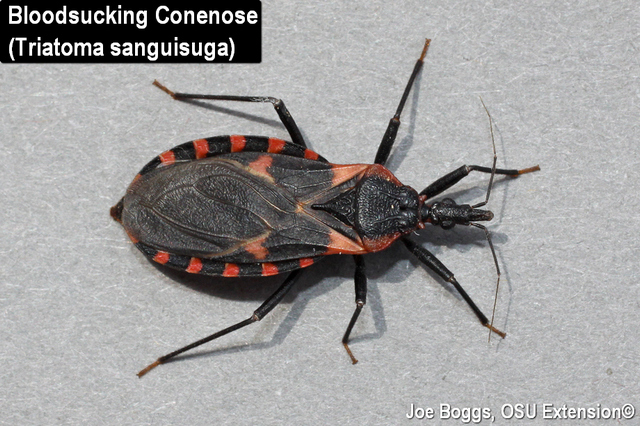