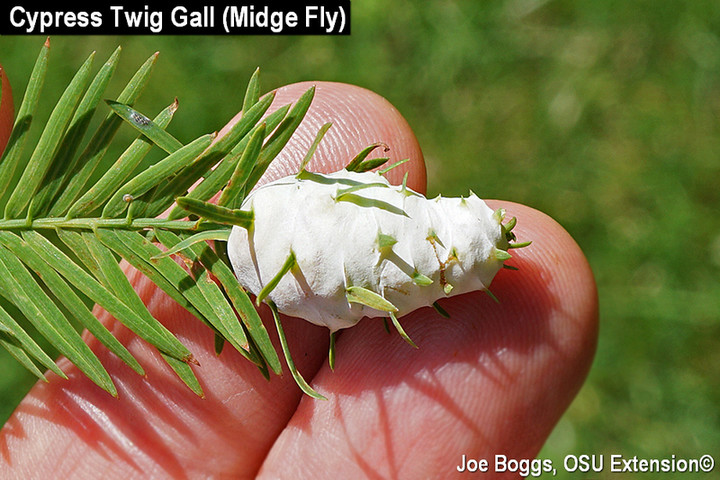 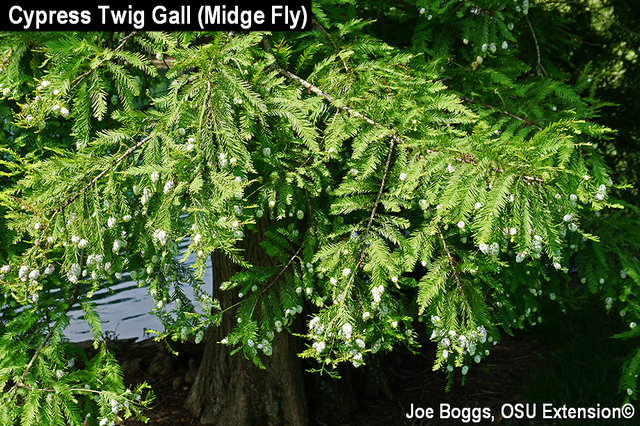 This is an odd-ball gall.  Unlike most gall-makers, this midge fly has two gall-making generations per season in Ohio.  This means trees that are heavily galled now will be even more heavily infested later this season. 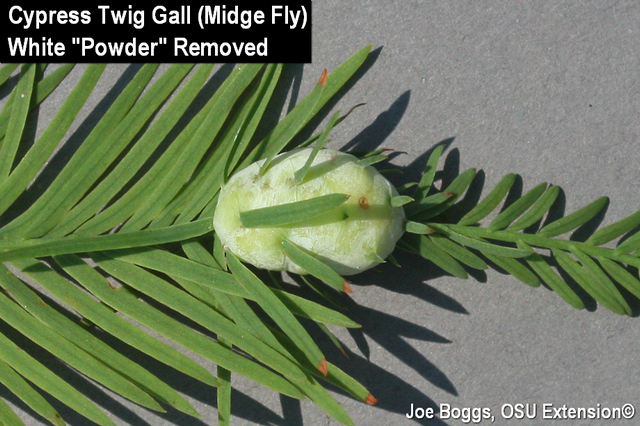 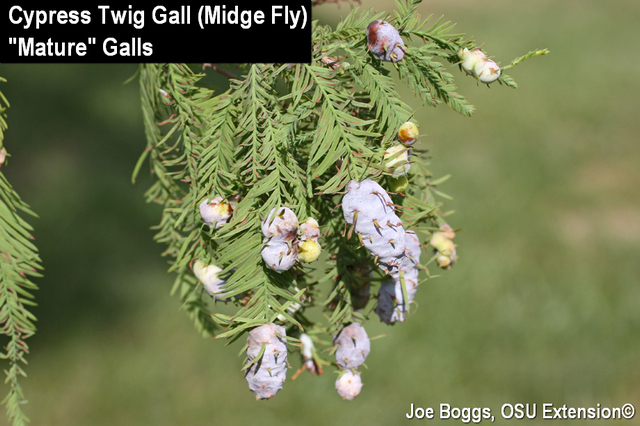 The common name "twig gall" is technically inaccurate since these are not stem galls; they arise from the base of leaflets.  Indeed, needles extend through the galls to protrude beyond the gall surface and a portion of new leaf growth usually extends beyond the tips of the galls. 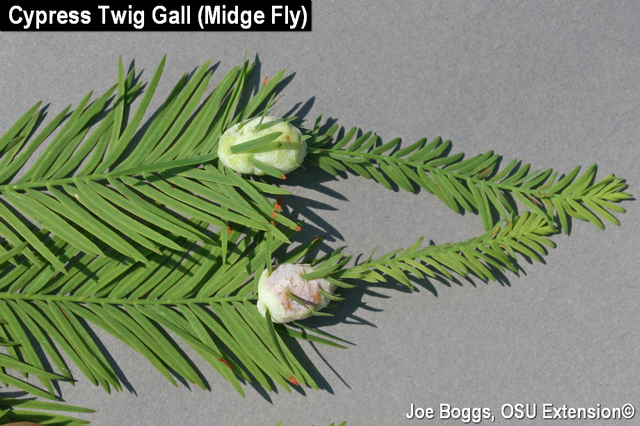 Slicing open the galls will reveal multiple larval chambers with each chamber containing a single tiny, midge fly larva (maggot).  Early instar larvae are cream colored but turn orangish-yellow to bright orange as they mature.  The size of the gall depends on the number of maggots that are housed within the gall. 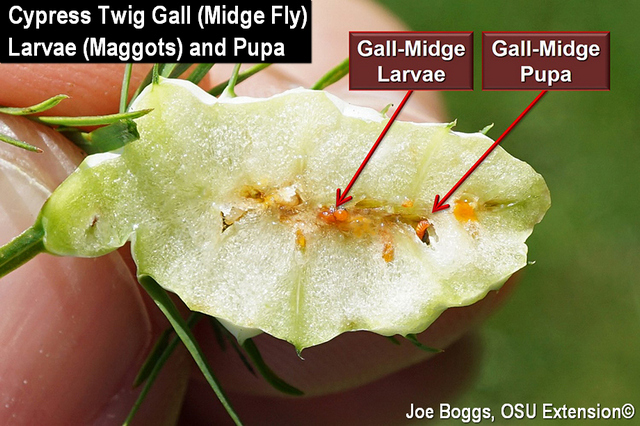 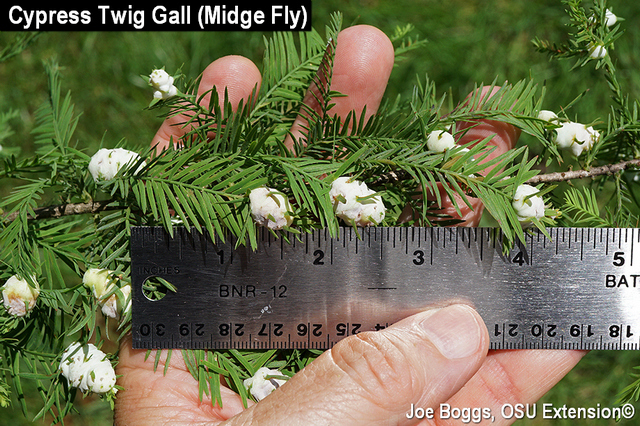 The midge flies spend the winter as larvae inside galls on the ground that have detached from the trees in the fall.  The immature flies pupate in the spring with adults emerging to fly to the newly expanding leaf buds where they lay eggs to initiate gall formation.  Larvae in the resulting first generation galls pupate within galls that remain attached to the tree.  Pupae are beginning to form in these first generation galls meaning adults will appear in around 1 – 2 weeks to initiate the second generation galls.

As with the vast majority of plant galls, cypress twig galls appear to cause no appreciable harm to the overall health of their tree hosts.  However, their snow-white appearance against the dark green foliage of baldcypress makes them very noticeable.  Also, the foliage extending from the tips of the galls may turn brown further reducing a tree's aesthetic appeal. 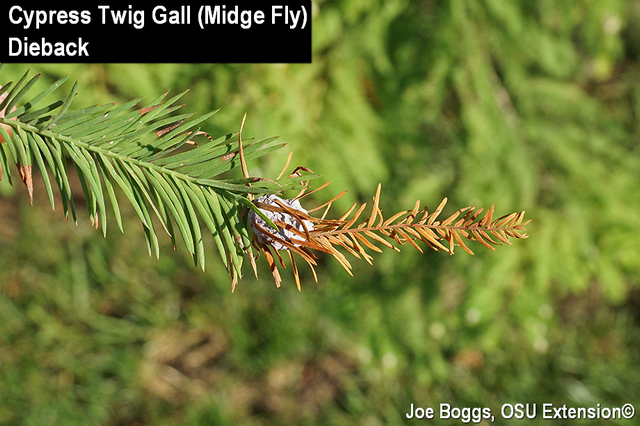 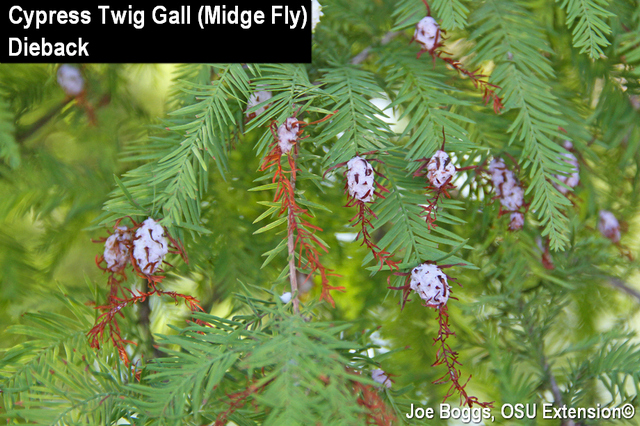 Adding to the challenge, it appears the genetics of some trees makes them very susceptible to gall formation.  It's common for one baldcypress tree to be heavily galled year-after-year while nearby trees remain free of galls. 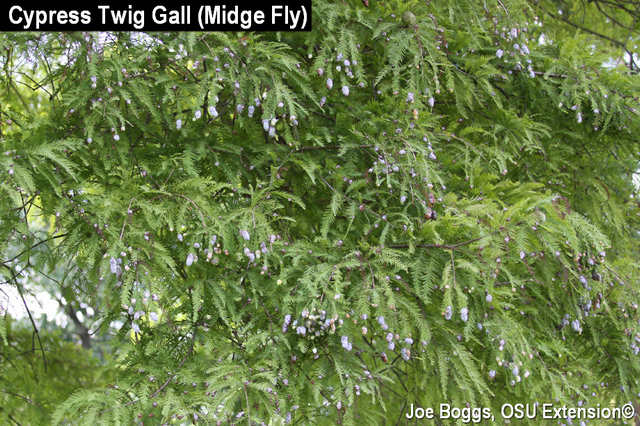 The cypress twig gall midge has several natural enemies including parasitoid wasps that target the eggs or the larvae.  There are also a few predators that may feed on the larvae.  I was surprised to find a predatory beetle larva, possibly a ground beetle, deeply embedded in one of the galls while taking pictures for this Alert. 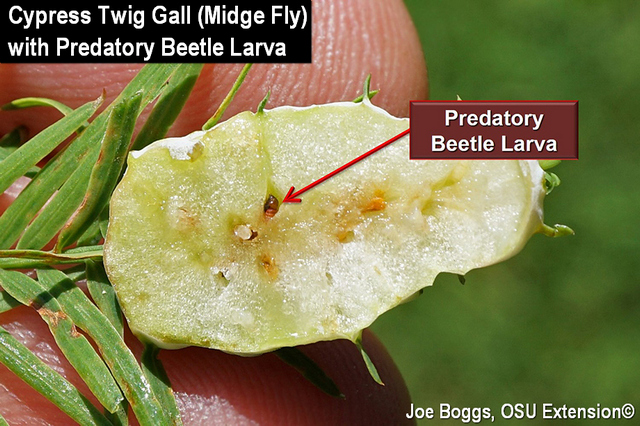 I also found a Japanese beetle (Popillia japonica) sampling a gall.  This was no doubt a random occurrence given that the beetles commonly feed on baldcypress foliage.  Unfortunately, natural enemies appear to be incapable of significantly reducing galls on highly susceptible trees. 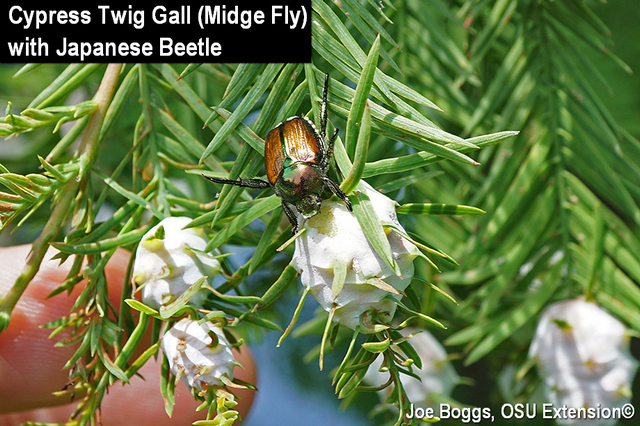 There are no effective chemical control recommendations to suppress this midge fly gall-maker.  Pruning and destroying newly forming galls right now may be helpful in reducing populations on small trees.  However, heavy galling indicates the tree is highly susceptible to the handiwork of the cypress twig gall midge fly.  Ultimately, knees won't be the only thing that stands out on the tree. 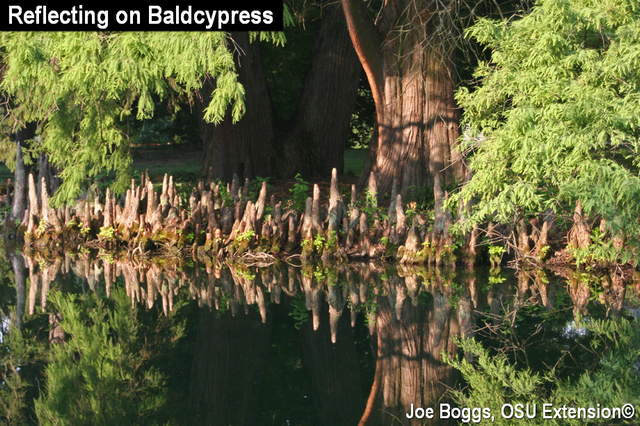