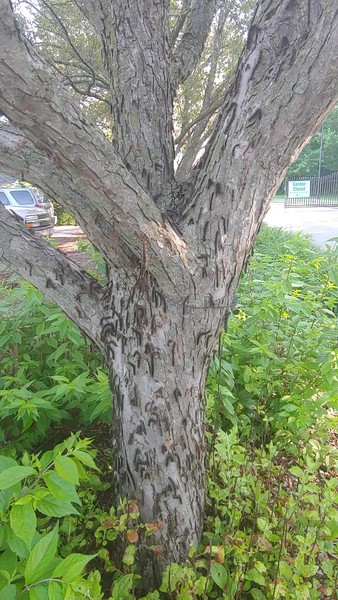 Last year was an active year for gypsy moth in Ohio, especially what I was seeing personally in Lucas County (Toledo, Ohio). Earlier this season, the Ohio Department of Agriculture (ODA) treated ten identified blocks in Lucas County. There were also treatments made across the state for both larval control and mating distribution at part of the national program coordinated in Ohio by ODA. Information on the treatments made by ODA, including maps, can be found on their website at: https://agri.ohio.gov/wps/portal/gov/oda/divisions/plant-health/gypsy-moth-program/gypsy-moth-program

Additionally, homeowners can treat, or hire an arborist with a pesticide license to make an application that will kill the caterpillars. Treatments are most successful when caterpillars are small and application is made in the spring soon after egg hatch. There are no controls recommended for the adult moths as they do not feed on the foliage or cause additional damage.

This morning I was out monitoring one location in the county that was not treated in 2019, but caterpillar numbers where high this spring. It was a great morning when I found approximately 90 to 95% of the caterpillars have been killed by either the fungus (Entomophaga maimaiga) or the virus (Nucleopolyhedrosis virus or NPV).

Each summer ODA deploys approximately 12,000 gypsy moth traps across the state to monitor movement and evaluate, detect or delineate newly established colonies. The traps collect the male gypsy moths using a pheromone lure placed inside the trap. Proposed treatment areas are determined in the fall prior to the treatment year, based on the catch numbers and the available funding between the state cooperators. Products and application rates are determined based on the catch numbers and other environmental factors.

Stay tuned to upcoming BYGL Alert for more information about the 2020 treatment application and program information.

If you are seeing signs of gypsy moth, including defoliation caused by the caterpillars, give us a shout out on BYGL by emailing stone.91@osu.edu