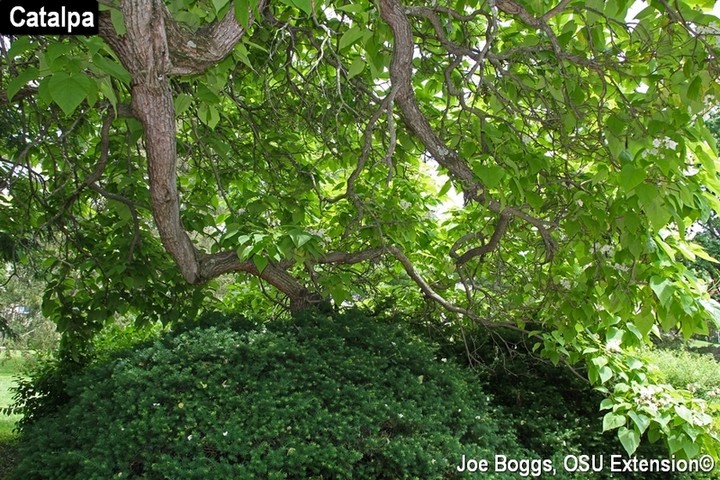 Catalpas (Catalpa spp., family Bignoniaceae) have long been one of my favorite trees.  Both the Northern Catalpa (C. speciose) and its shorter southern cousin, S. bignonioides, sport huge, orchid-like flowers that attract a bevy of pollinators, particularly bumble bees. 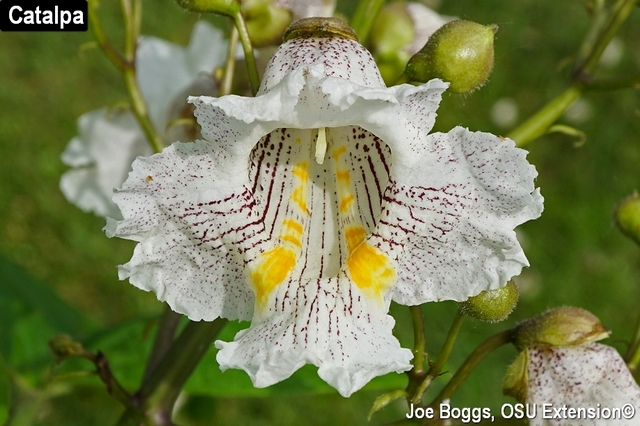 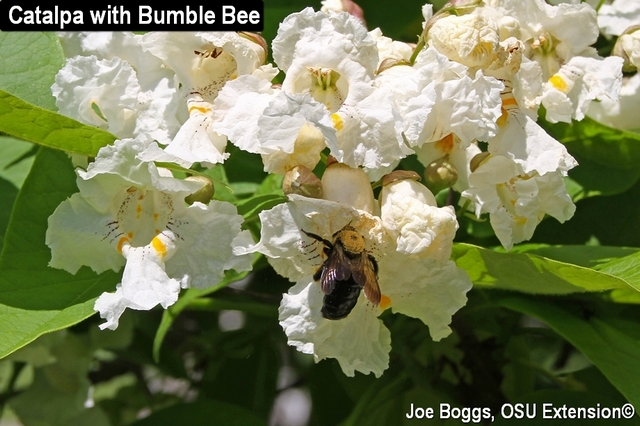 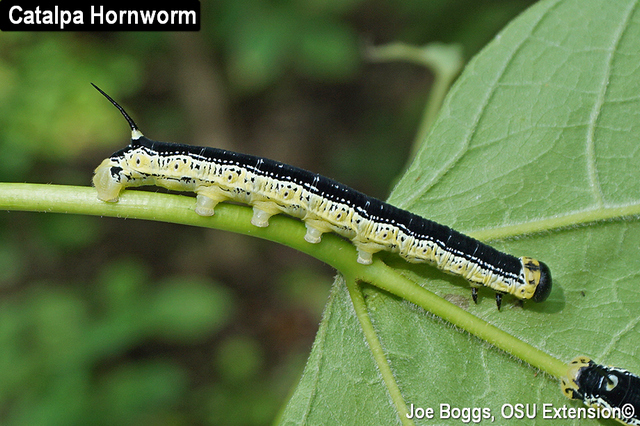 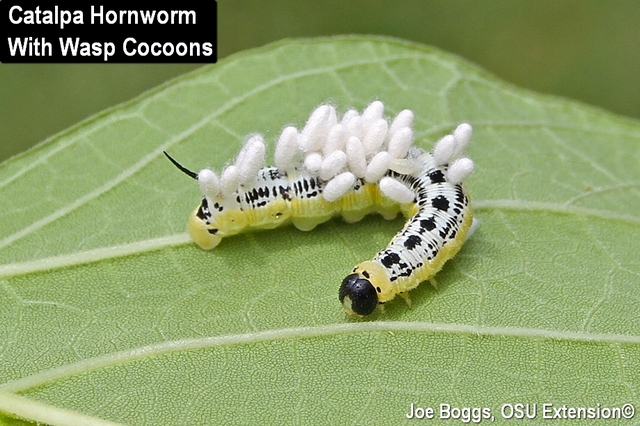 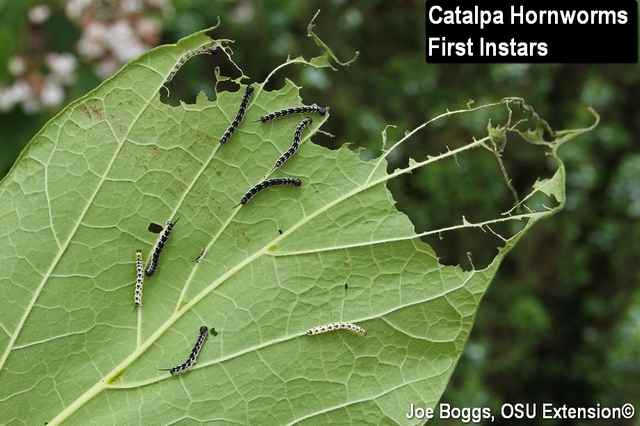 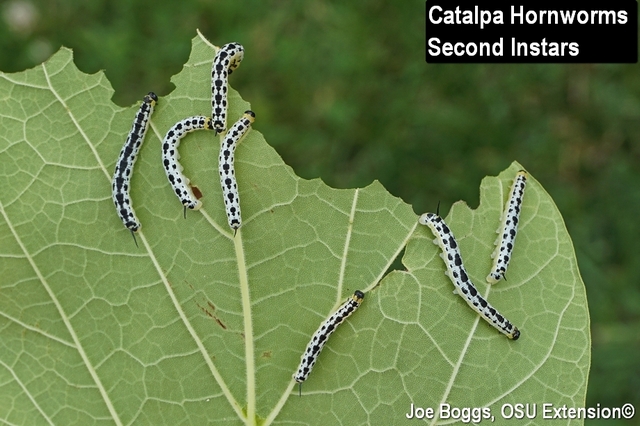 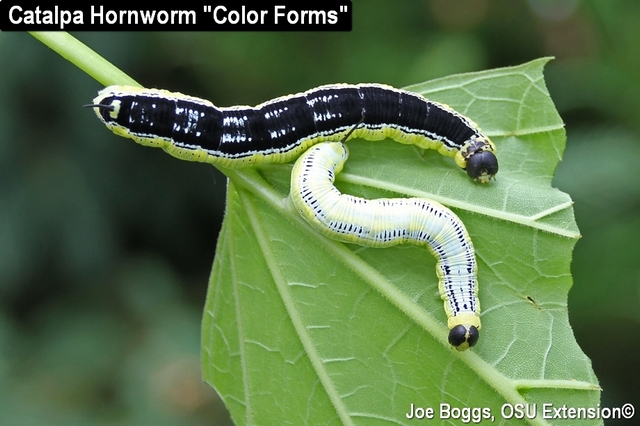 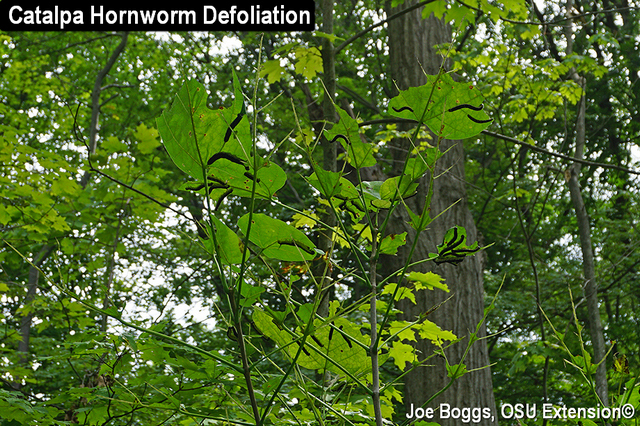 I learned first-hand about the sometimes dramatic impact of the coevolution between native pests and native trees in the Boone County Arboretum (Union, KY).  The Arboretum experienced an "outbreak" of hornworms in 2015, but the heaviest defoliation (100%) occurred on the hybrid Catalpa × erubescens 'Purpurea'.  The hybrid mixes northern catalpa genes with those from the Chinese catalpa (C. ovata).  It was planted closely in the Arboretum with our two North American species, northern and southern catalpas.  However, our native catalpas had very few hornworms and minimal defoliation. 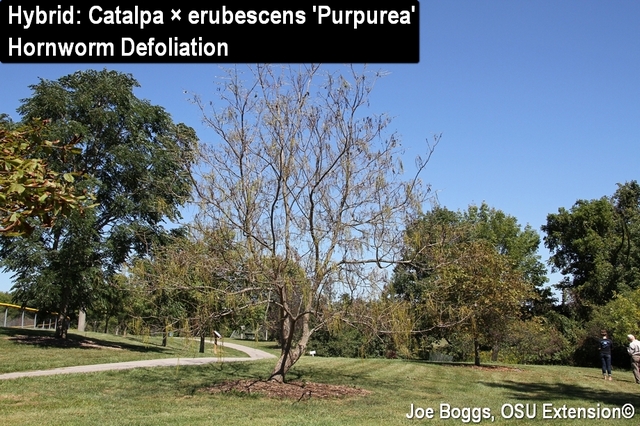 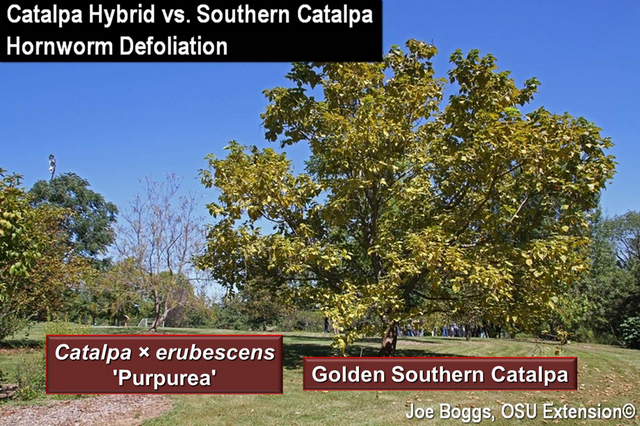 This was not a scientific study with replicated plots; however, one reasonable interpretation of the observation is that our native trees evolved some defenses against their hornworms.  Perhaps the defenses were lost when non-native genes were introduced to produce 'Purpurea'.

The Caterpillar and Its Wasp

Although catalpa hornworm caterpillars can occasionally produce noticeable defoliation, they must run a gauntlet of beneficial insects including parasitoid and predatory wasps.  The obvious white, oblong structures that occasionally sprout from the backs of the hornworms are NOT eggs!  They are the cocoons of the endoparasitoid wasp, Cotesia congregata, which is also known as the "Hornworm Wasp." 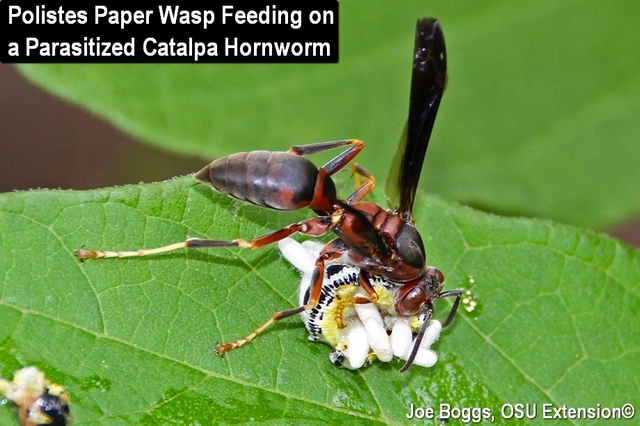 The offspring of an endoparasitoid develops inside its host; it's like having a predator living inside (see the movie Alien (1979)).  An ectoparasitoid does the same while attached to the outside.

C. congregata is a "gregarious endoparasitoid" meaning that multiple wasps develop inside a single caterpillar.  It's a bit unusual in the parasitoid world.  Most parasitoids have a relatively narrow host range affected by the complicated coevolutionary dance between the parasitoid and its host.  However, C. congregata targets several species of sphinx moths. 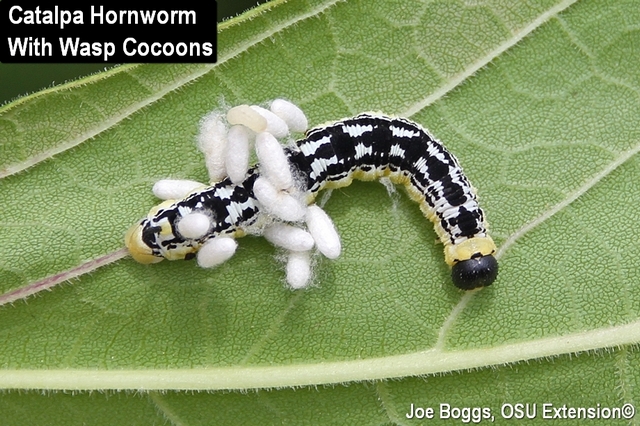 While C. congregata a well-known nemesis of catalpa hornworms, you will also see its white cocoons sprouting from the backs of tomato hornworms (Manduca quinquemaculata), tobacco hornworms (M. sexta), and laurel sphinx moth (Sphinx kalmiae) caterpillars.  Obviously, the parasitoid wasp takes full advantage of the effective tools provided through its coevolution with hornworms in general. 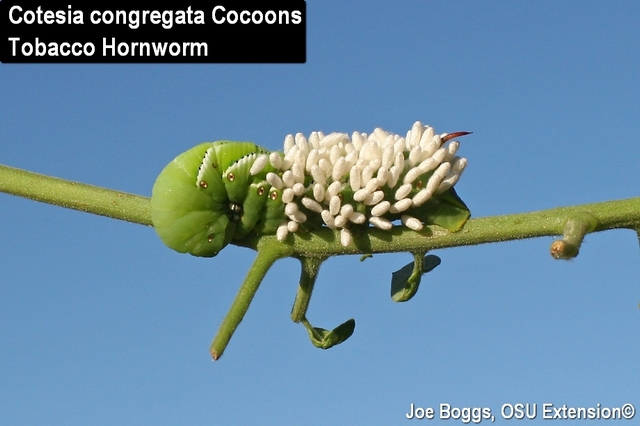 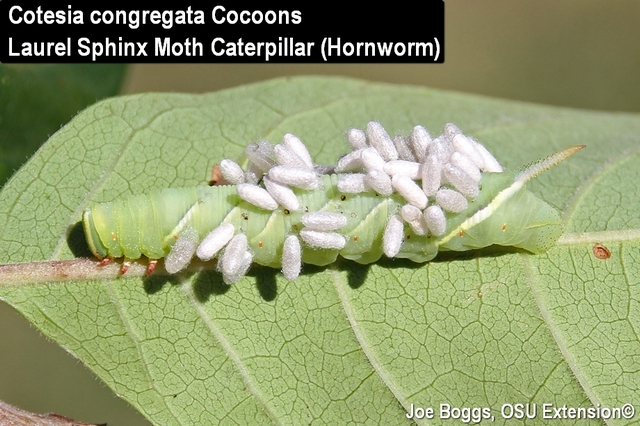 The Wasp and Its Virus

Of course, once the immature wasps near pupation, all bets are off.  They consume all internal structures and emerge from their caterpillar host to spin cocoons.  Their emergence holes are often heralded by a droplet of straw-colored blood (hemolymph) oozing from the wound. 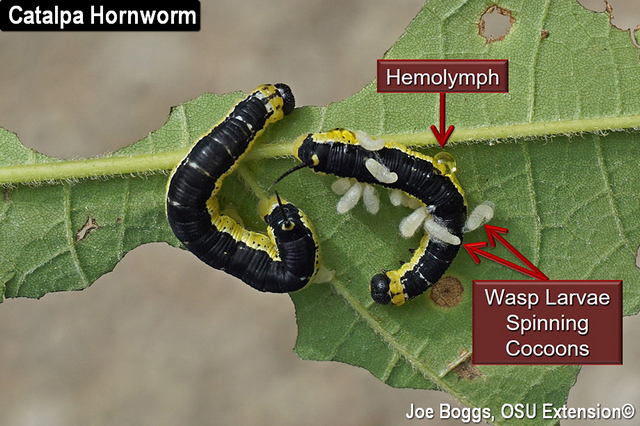 Zombie hornworm caterpillars festooned with the white, oblong, silken cocoons are usually much smaller than their non-parasitized siblings.  This is the result of suppressed development caused by the combined effects of teratocyte hormones and wasp venom.

However, no wasp larva would survive if they succumbed to the caterpillar's immune response system.  This is where a fascinating relationship between the wasp and a virus comes into play.

The wasp relies on a virus to suppress the caterpillar's immune system so its offspring and teratocytes are not rejected.  But, where does the virus come from?

The virus does not carry genes to replicate itself.  Those genes are carried in the wasp's genome.  In fact, the virus does not exist until the proteins and genetic payload of the virus are coded from wasp DNA inside specialized cells in its ovaries, called calyx cells.  The result is called a virion which is the complete, infectious form of a virus.  The virus is created by the wasp then injected into the hornworm caterpillar.

A virus that is hidden within and created from the genome of a wasp?