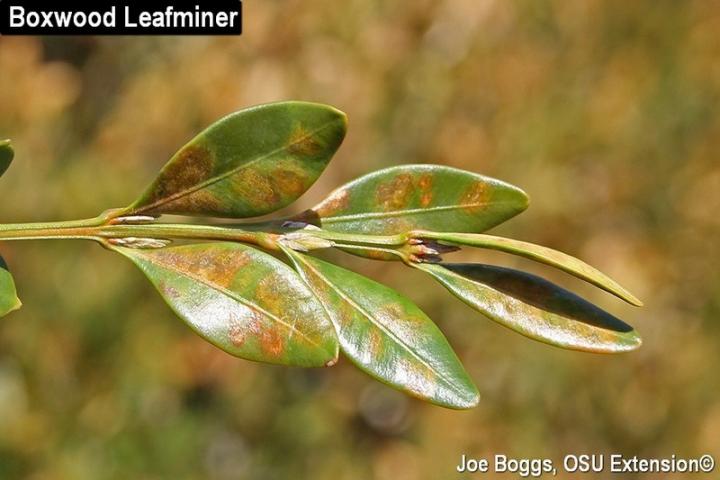 Boxwoods with light brown to golden brown leaves are common this spring in Greater Cincinnati.  Some of the leaf browning is due to winter injury with foliage at the tips of branches, particularly at the tops of plants or on the windward side of plants, most heavily affected. 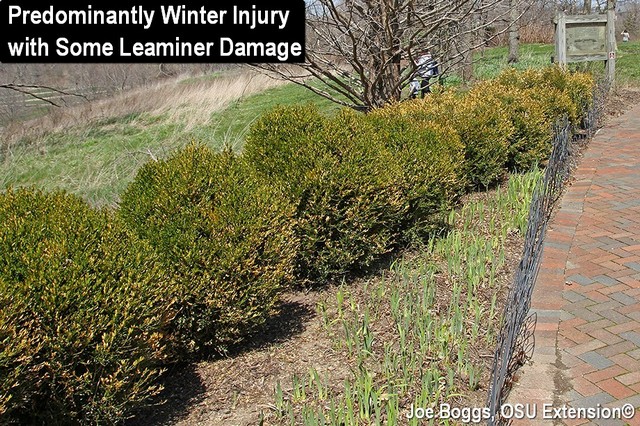 Some was caused by salt damage either directly with "ice melt" or rock salt inadvertently thrown onto foliage, or indirectly with "salt spray" carried onto foliage from nearby roadways.  Salt damage is sometimes, but not always, concentrated on wide side of the plant. 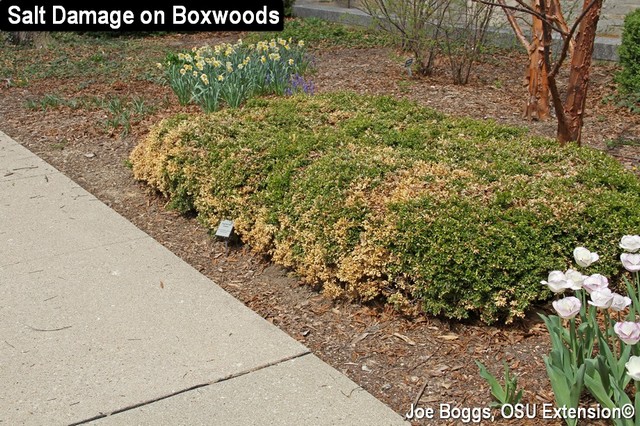 However, a close examination may also reveal the telltale blister-like leaf symptoms caused by the boxwood leafminer (Monarthropalpus flavus).  Leafmines may be found throughout the plants although the highest concentration also occurs on foliage at branch tips. 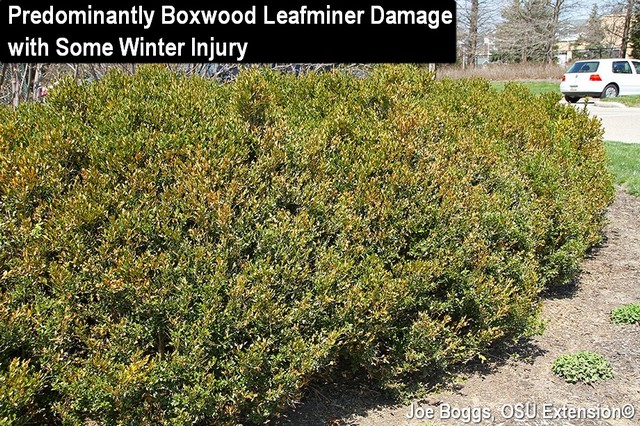 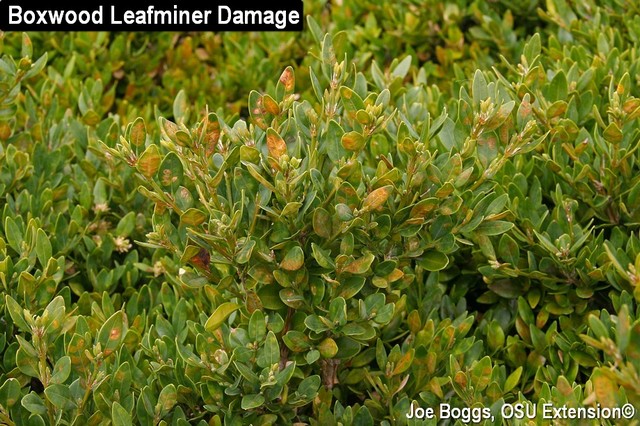 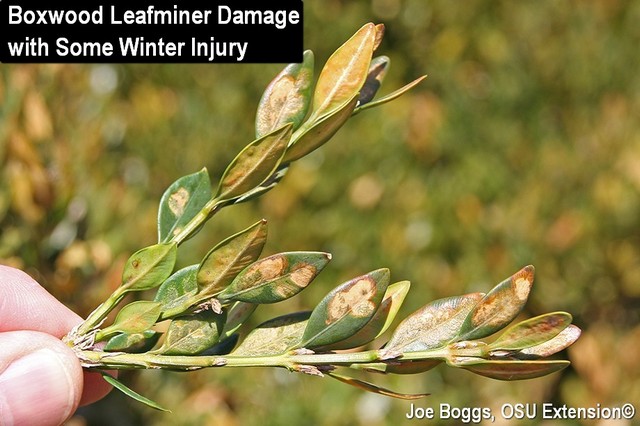 Gently separating the upper and lower leaf surfaces (the leafminer had already done most of the work!) will reveal the bright yellow leafmining larvae (maggots) of this midge fly wiggling around in their blister mines.  The larvae will soon complete their development and pupate.  The pupae are also bright yellow at first, but turn orangish-yellow as this stage nears completion. 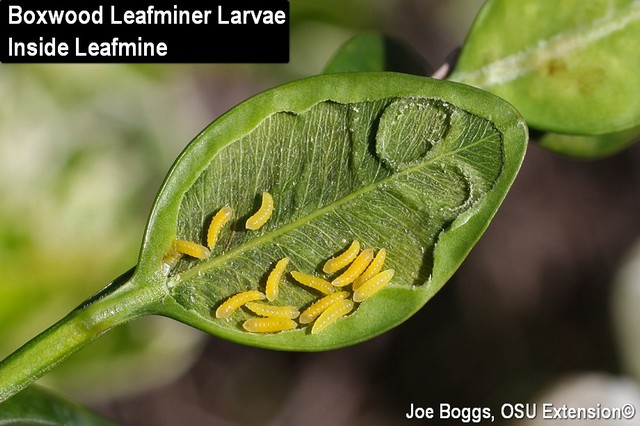 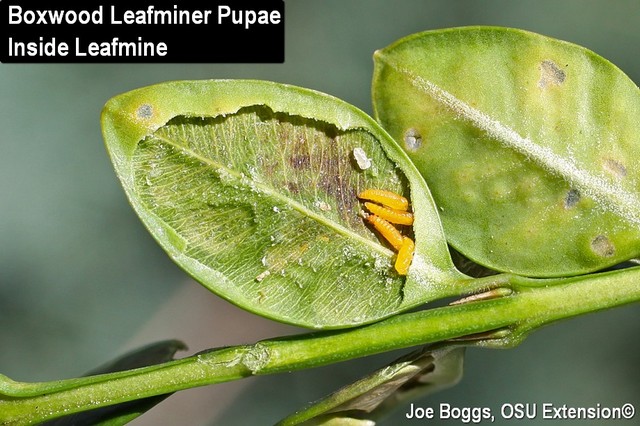 This non-native midge fly was accidentally introduced into North America from Europe in the early 1900s and is now common throughout Ohio, particularly in the southern and central parts of the state.  Adults emerge at around the same time red horsechestnuts (Aesculus × carnea) and doublefile viburnums (Viburnum plicatum) are in full bloom (440 GDD).  Except for their bright orange abdomens, the adults superficially resemble miniature mosquitoes. 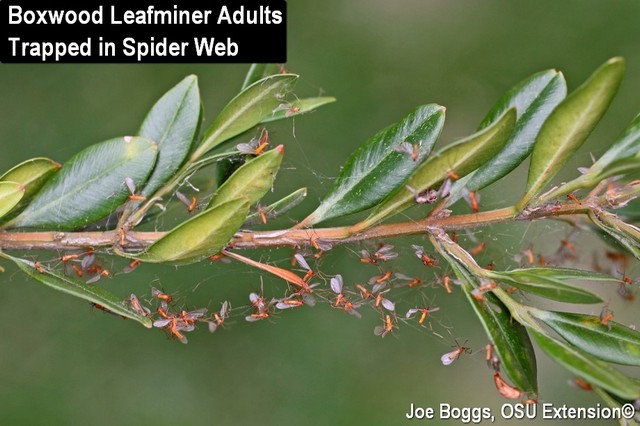 Females use their needle-like ovipositors to insert eggs between the upper and lower leaf surfaces of boxwood leaves.  Each leaf may contain multiple oviposition sites with several eggs per site.  These sites will become individual leafmines producing the blister-like leaf symptoms. 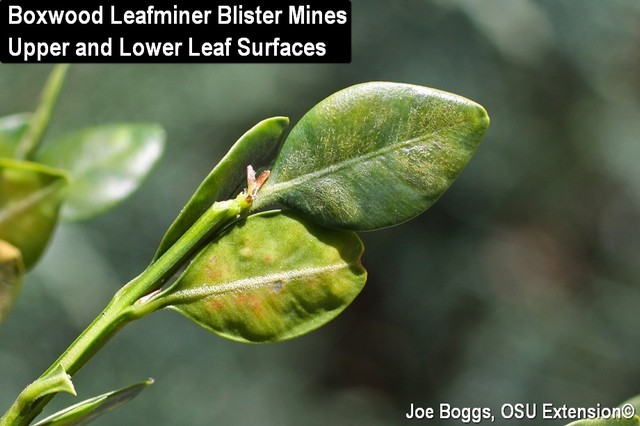 Eggs hatch in early-summer and the resulting larvae spend the remainder of the season consume interior leaf tissue as they develop through the 1st and 2nd instar stages.  Winter is spent as 3rd instar larvae inside the leafmines.  The larvae resume feeding in the spring and develop through a 4th instar stage.

Much of the leaf damage occurs in early spring with the ravenous larvae rapidly expanding their leafmines.  Multiple leafmines in individual leaves may coalesce causing the upper and lower leaf surfaces to delaminate over the entire leaf.  Individual mines may turn reddish-green at this time of the year with heavily mined leaves turning from yellow to orangish-brown causing the leafmining damage to be mistaken for winter injury.

A close examination of the leafmines at this time of the year may also reveal small translucent "windows" created by the larvae in the lower leaf surface.  The pupae will wiggle through these weak points to ease emergence of the fragile adults. 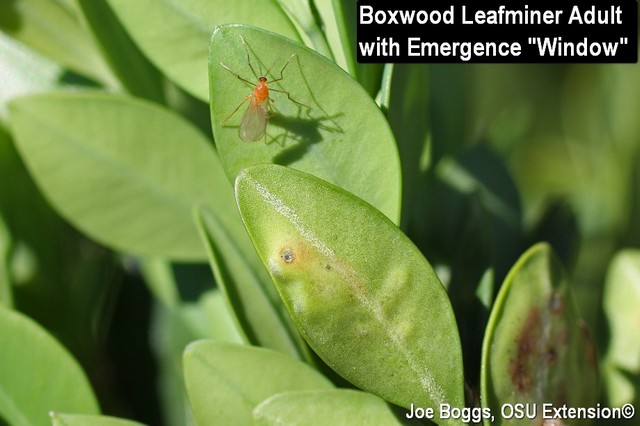 This pupal activity is responsible for one of the most unusual features of this midge fly:  reports of hissing, crackling, or rustling sounds coming from heavily infested boxwoods.  I've reported on this strange phenomenon in past BYGLs.  So, reports from gardeners or landscapers that they've heard boxwoods going snap, crackle, and pop should be taken seriously as the odd sounds are an indicator of a heavy boxwood leafminer infestation.

Damaging boxwood leafminer infestations can be suppressed through applications of neonicotinoids such as imidacloprid (e.g. Merit, Xytect, Marathon, and generics) or dinotefuran (e.g. Safari, Transtect, Zylam).  However, application timing has been modified in recent years to avoid negative impacts on pollinators.

Boxwood blooms attract a wide range of pollinators; blooming plants can literally buzz with their activity.  Therefore, the insecticide applications must be delayed until AFTER boxwoods bloom.  Some minor miner damage will occur, particularly with the imidacloprid that is taken-up more slowly compared to dinotefuran.  However, this is a small price to pay for protecting pollinators. 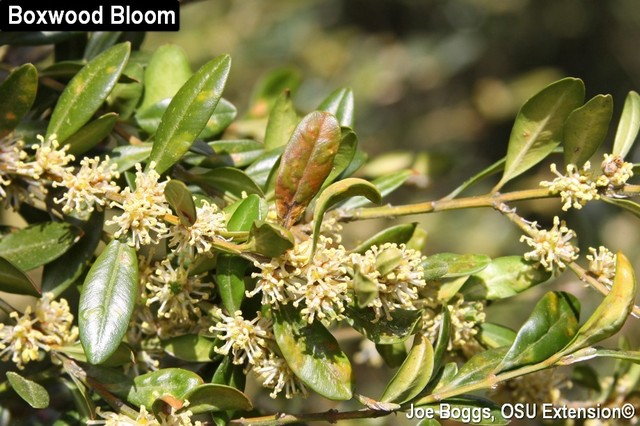 You may find recommendations for topical applications of pyrethroid insecticides such as bifenthrin (e.g. Talstar) to target adult leafminer females before they lay eggs.  However, adults typically emerge in Greater Cincinnati while boxwoods are in full bloom, so I no longer recommend this application.

Plant selection provides a more long term solution to the depredations of boxwood leafminer by removing insecticides from the management equation.  A helpful research-based listing of the relative susceptibility of boxwoods to the leafminer was published in 2014 by the American Boxwood Society in their "The Boxwood Bulletin" [see More Information below].