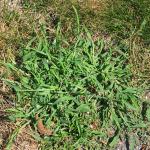 With these rains the lawn is beginning to grow and the weeds are not far behind.  Some of the earliest emerging broadleaf weeds have begun to emerge.  The biggest problem with weeds in turfgrass is reduced aesthetic value, although some weeds can out compete turfgrass when management is reduced.  Smooth and large crabgrass, yellow foxtail, and annual bluegrass are the most frequent annual grass weeds in turfgrass.
Turf Tips
Published on
April 9, 2018
Authors
Jeff Stachler 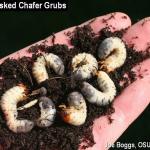 This has been one of the most prolific seasons for Japanese beetles in Ohio for many years. High localized populations were observed throughout the state. Adult populations of both Northern and Southern Masked Chafers, two of our other common "white grub producing" beetles, were also very high this season, particularly in the central and southern parts of Ohio.
Turf Tips
Published on
August 10, 2017
Authors
Joe Boggs
Dave Shetlar

This Turf-Tip was provided Joe Rimelspach and Todd Hicks with OSU – Plant Pathology and Turfgrass Program.

Of the four seasons, this is the “third best time” to seed a lawn. The best is autumn, then winter, followed by spring and the least desirable time is summer. The main challenge with the spring seeding is the large number of weeds (both grassy weeds and broadleaf weeds) that can come up with the grass seed. Seed as early as possible in the spring so new plant can develop a root system before summer heat and dry conditions... 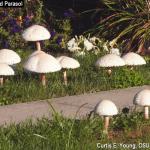 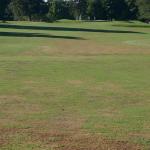 The heat and humidity have persisted in Ohio and the surrounding region, causing continued issues and concern for turfgrass managers. Don't panic...cooler temps are just around the corner!
Turf Tips
Published on
September 1, 2016
Authors
Joseph W. Rimelpsach 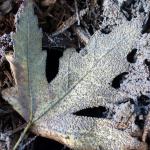 While walking about the other day I came upon a scene of serial sliming. A slime mold, probably a species of Mucilaga, was colonizing mulch under a maple tree. It was also colonizing a fallen maple leaf. It was also colonizing turfgrass plants next to the mulched area. This cohort of the colonized should tell us something: this slime mold is not very particular. It is not a parasite of this maple leaf or the turfgrass, but is just feeding on microbes in the decayed organic matter.  So no harm, no foul, relative to the need for controls. Just rake it or wash it off if it offends... 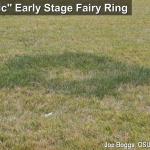 The National Weather Service (NWS) issued an Excessive Heat Warning today for Greater Cincinnati. This is the highest alert based on the NWS Heat Index. I believe anything higher would cause spontaneous human combustion. I made a quick BYGL Alert! photo trek and found that fairy rings are now being revealed by the current hot/dry conditions in southwest Ohio.
Turf Tips
Published on
July 22, 2016
Authors
Joe Boggs 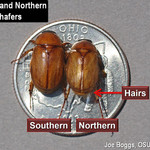 Northern Masked Chafer (Cyclocephala borealis) and Southern Masked Chafer (C. lurida) adults are appearing around porchlights at night in southern Ohio.  It is common for people to assume that white grubs found beneath turfgrass in Ohio are Japanese beetle (Popillia japonica) grubs.  This is no longer a safe bet.  Japanese beetles have largely been replaced by these two chafers as the dominant "white grub producing" beetles in many areas of Ohio including the southern part of the state.  Indeed, I asked an experienced lawn care company last season to collect... 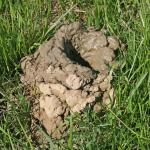 Mud "chimneys," the nuisance handiwork of Terrestrial or Burrowing Crayfish are rising above turfgrass in central and southwest Ohio.  There are several species of burrowing crayfish, but most belong to two genera:  Cambarus and Fallicambarus.  Like their aquatic cousins, these crayfish use gills to extract oxygen from water.  However, unlike their water-soaked cousins, burrowing crayfish spend most of their lives on land.  They must dig their burrows down to ground water so they have a ready source of oxygen.  This connection to a high water table explains why most...