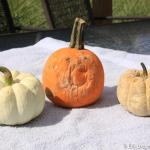 In the past few weeks, I have received multiple questions from farmers growing pumpkins, asking what is going on with the pumpkins!  When pressed about what they were seeing, the response is always a “come out and see for yourself” and so I usually do!  For me, plant problem diagnostics are ALWAYS more accurate and effective when done hands-on, using my own senses and asking those pertinent or impertinent questions to get at the answers!  In these cases of the great pumpkin patch puzzle, they would pick perfectly healthy looking pumpkins, wash the dirt off of rinds and put them into bins... 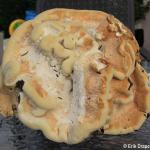 A local arborist called me one day and asked if it was possible that I could identify a mushroom.  Sure, I said I could do that and reminded him that identification is always much easier if a sample was dropped off for me to examine.  Later, as I rehearsed our conversation, I remember hearing him chuckle and then saying, “Well, you’re going to love this one”.   I was thinking through a couple of types and shapes of typical mushrooms when I walked into my office the next morning.  You can imagine my surprise when I spied on my desk, the huge fruiting body of Bondarzewia berkeleyi ... 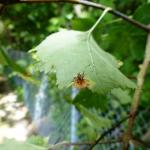 For the last month the fungal tubes of the “aecial” stage of several cedar rust fungi, namely cedar-apple rust (Gymonsporangium juniper-virginianae) and cedar-hawthorn rust (G. globosum) have been evident on leaf undersides of hawthorns, as seen in the accompanying picture.

These rust fungi spend about a year and half on certain junipers (in the Cupressaceae family) before microscopic spores of the fungus oozing from galls on the juniper blow in the spring to certain genera in the Rosaceae family such as hawthorns and apples and crabapples. 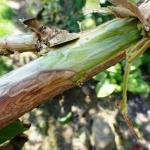 Today I met with OSU horticultural great Kenny Cochran at his garden in Wooster and we enjoyed checking out everything from his sweet cherry tomatoes to the two-toned leaves of his silver linden tree. One plant which gave us concern was a seven-son flower tree (Heptacodium miconoides). More on the tree later in an upcoming Tree of the Week post, but some stem dieback amidst the just-coming-into-flower panicles is what got our attention. Shoots with brown leaves amidst perfectly healthy-looking shoots with green leaves. 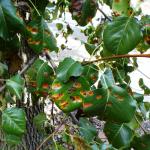 While walking in German Village in Columbus with ONLA’s Frits Risor last week we revisited the Callery pears with rust disease noted earlier this season (http://bygl.osu.edu/node/342). I wanted to see if the rust was isolated to the two trees heavily affected in June. As earlier, the two trees in question were speckled with bright orange lesions on the upper leaf surfaces, but I suspected that by now the rust fungus would have undergone sexual reproduction in the leaves with aecial spore pustules developing  on the lower leaf surfaces as would be seen with the cedar-apple rust fungus (... 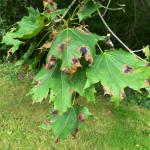 Tar spots of maple, caused by species of the Rhytisma fungus, are prominent now, although mostly not as severe as in wetter summers. There are two different tar spot diseases of maple, one affecting silver and red maples, caused by Rhytisma acerinum, resulting in dense, tarry spots that truly reflect the “tar” spot name (first picture below).
Disease Digest
Published on
August 22, 2016
Authors
Jim Chatfield

The Reddened Rose of Texas 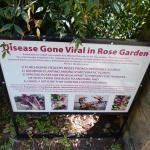 “Rose rosette is an epidemic, and North Texas is the epicenter,” said David Forehand of the Dallas Arboretum: “This is a game changer for roses, I’m sad to say.” This was in a July article in the Fort Worth Star-Telegram by Sara Bahari, reflecting the anguish felt by Texans regarding the demise of so many of their beloved rose gardens.
Disease Digest
Published on
August 16, 2016
Authors
Jim Chatfield
Elm Yellows: The Re-Emergence of an Old Killer 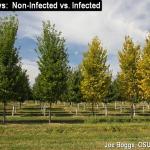 Jim Chatfield and I visited the USDA Forest Service, Northeastern Research Station, in Delaware, OH, on Monday where they are waging a battle to eliminate Elm Yellows (EY) from their American Elm Restoration Project research plots.  I last saw the disease in southwest Ohio in 2013.

The problem is that American elms (Ulmus americana) that are resistant to Dutch Elm Disease (DED) have no known resistance to Elm Yellows (EY).  DED is caused by a fungal infection; EY is caused by a phytoplasma which is a type of bacterium.  DED fungi plug the xylem.  The EY phytoplasma...

Gray Leaf Spot has been confirmed on perennial ryegrass in Ohio! On Friday July 29, 2016 two cases of the disease were confirmed in the Clinic. This is at least a month earlier than normally detected in Ohio. Both cases were in central Ohio and at sites that have had a history of the disease. This can be a very destructive disease to ryegrass, both annual and perennial. To date this is only a serious disease on ryegrasses in the Midwest.
Disease Digest
Published on
August 4, 2016
Authors
Nancy J. Taylor
Diagnostic Double-Take: Scorch or Scab 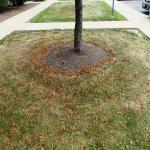 chatfield.1@osu.edu Sat, 07/30/2016 - 16:34
Last Friday, outside our bank in Orrville, Ohio, I espied a crabapple tree with a carpet of brown leaves underneath the tree. On first glance, I imagined this to be due to leaf scorch and then leaf drop due to recent dry weather. After all, we are almost eight inches below normal over the past three months in many northeast Ohio areas. Made sense. I was simply following Question #4 of the 20 Questions of Plant Diagnostics: What Do You See That Looks Abnormal?
Disease Digest
Published on
July 30, 2016
Authors
Jim Chatfield
Subscribe to Disease Digest
Ohio State University Extension