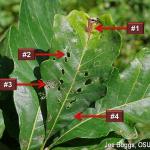 I would never recommend bringing a single tree leaf to an Extension office or garden center and asking the question, “what’s wrong with this tree?” However, sometimes a single leaf can speak volumes. Just accompany me or Jim Chatfield on one of our diagnostic walk-abouts (stand-abouts?) and we’ll prove it to you!
Hort Shorts
Published on
July 1, 2017
Authors
Joe Boggs 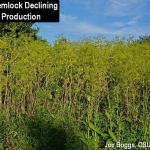 Poison hemlock (Conium maculatum, family Apiaceae) is one of the deadliest plants in North America. This non-native invasive weed contains highly toxic piperidine alkaloid compounds, including coniine and gamma-coniceine, which cause respiratory failure and death when ingested by mammals. So, how can fennel aphids survive sucking juices from the plant that killed Socrates and how can lady beetles survive eating the aphids?
Bug Bytes
Published on
June 29, 2017
Authors
Joe Boggs 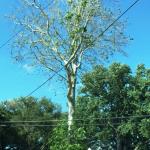 This morning I got a message from Frank Leon, horticulturist with Barnes Nursery, complete with the above image showing the thinning of sycamore (American planetree; Platanus occidentalis), a common sight seen in northwest Ohio this Spring. The problem is sycamore anthracnose, caused by the fungus Apiognomonia veneta.

This particular anthracnose fungus occurs on planetrees, including our native sycamore, but less so on Platanus orientalis and the hybrid between these two planetrees, Londone planetree (PlatanusX acerifolia... 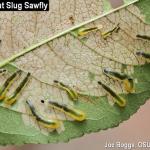 In 2015, I reported that I had found sawfly larvae skeletonizing American bladdernut (Staphylea trifolia) leaves in southwest Ohio (see BYGL Bug Bytes, September 3, 2015, “Scarlet Oak Sawfly on Bladdernut?”). The title of that report was based on the appearance of the larvae: they were the spitting image of Scarlet Oak Sawfly (Caliroa quercuscoccineae) which is sometimes called the scarlet oak slug sawfly or just oak slug sawfly.
Bug Bytes
Published on
June 29, 2017
Authors
Joe Boggs 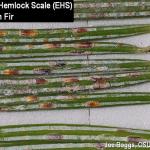 I revisited a Cilician fir (Abies cilicica) earlier this week in southwest Ohio that I found to be heavily infested with Elongate Hemlock Scale (EHS) (Fiorinia externa) in 2010. I’ve been monitoring this tree since that time and have watched the scale population rise and fall then rise again; the tree has never been treated.
Bug Bytes
Published on
June 29, 2017
Authors
Joe Boggs 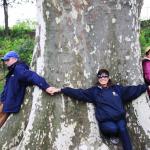 Trees matter in many ways; just ask the Ents. Their beauty and grace is wondrous, they are proven healers for hospital patients, their social importance as historical references is well-known, from Johnny Appleseed to the Signal Tree in Summit County, and their environmental services, well…

With that in mind, in past years we...

The Return of an “Old Southern Friend” 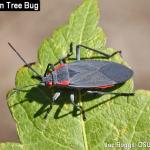 Julie Crook and I spent a lovely afternoon yesterday “cruising” the Cincinnati Botanical Garden and zoo with Steve Foltz (Director of Horticulture) looking at their impressive plant displays and working with Steve on with some diagnostics. During our walk-about, Steve pointed out an “old friend” scurrying beneath a goldenrain tree (Koelreuteria paniculata; Soapberry Family, Sapindaceae): a Goldenrain Tree Bug (Jadera haematoloma).
Bug Bytes
Published on
June 28, 2017
Authors
Joe Boggs 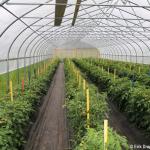 I was called out to visit a high tunnel vegetable grower, who was concerned about what he was seeing on tomato leaves, which he hadn’t seen before on the plants.  He told me that spots had suddenly began to appear on his tomato plants, and that he really didn’t want to lose the plants or the huge crop of tomatoes that the plants had set. 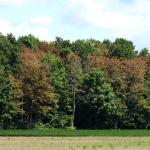 What begins as minor feeding injury on the leaves of basswood (Tilia spp.), can quickly become an attention grabber, especially if you are unfamiliar with the insect and the injury caused. The leaves appear to be torched and stand out among other trees in the area. The damage is obvious even as you are traveling on highways - at the recommended speeds of course.

Shrub of the Week: Smokebush 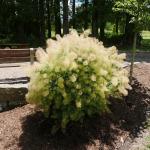 Smokebush or smoketree (Cotinus) is puffing away right now, providing the almost ethereal inflorescences that give it its name  and alternates such as cloud bush, mist tree, wig tree, and Jupiter’s beard.
Hort Shorts
Published on
June 26, 2017
Authors
Jim Chatfield
Subscribe to